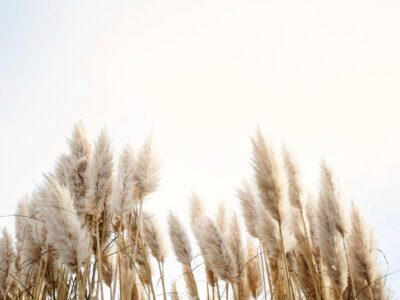 Decorative plume grasses add movement and drama to the home landscape. Their ornamental uses vary from specimen, border, or mass planting. Growing plume grasses in the garden provides an excellent xeriscape or drought plant alternative. Plume grass is also called hardy pampas grass, a legendary giant among ornamental grass species. Plume grass is suited for USDA zones 5 to 9 and as an added bonus it is deer resistant. This Mediterranean native is a relative of sugarcane and an interesting specimen year-round.

Ornamental plume grass is a clumping plant that can grow 8 to 12 feet (2-3.5 m.) high with whip-like blades that are slightly serrated and sharp on the edges. The plant produces a feathery inflorescence from September to October which will persist often well into winter. The 9 to 14 foot (2.5-4.5 m.) tall flower can also be harvested for indoor arrangements.

The decorative plume grass may spread to 5 feet (1.5 m.), but it has weak stems that break in high wind and should be planted in a sheltered location. Growing plume grass as a part of the perennial background provides sound and motion to many types of plants.

Plume grass is often referred to as northern pampas grass due to its hardiness. The ornamental plume grass thrives in rich, moist soils and is a prolific self-seeding plant. Before planting it is a good idea to work in 3 to 4 inches (8-10 cm.) of compost or another organic amendment. Drainage is imperative, as the plant will rot off at the base when grown in soggy soils.

Growing plume grasses in full sun provides four seasons of interest. The gray-green foliage burnishes with color in fall and the pink flowers become a silvery accent in winter.

Decorative plume grass requires watering to the depth of the roots every two weeks during the growing season. The first year it will need a regular watering schedule, which encourages a deep healthy root system. In the dormant period in winter, it can usually subsist on natural precipitation.

Fertilize the grass annually in spring with an all-purpose plant food.

Broken blades should be removed and a rake run through the blades will pull out the old dead foliage. Be careful and wear gloves as the plant’s leaves are sharp. Winter plume grass care requires cutting back the foliage to 6 inches (15 cm.) from the ground in early spring to make way for new foliage.

The grass should be dug up and divided in spring or summer. A sharp root saw will make cutting through the root ball fairly easy. If you do not divide the plant, it will begin to die out in the center and affect the appearance of the ornamental plume grass.

The plant freely seeds itself and can become quite obnoxious. The baby plants are easy to pot up and grow on. If you don’t want little plume grasses all over, make certain you cut off the inflorescence before it goes to seed.