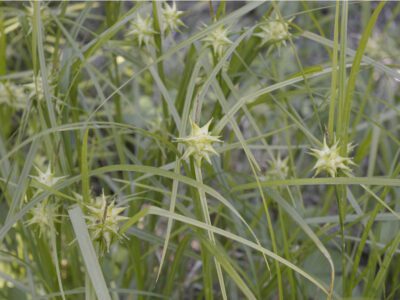 One of the more widespread grass like plants in eastern North America is Gray’s sedge. The plant has many colorful names, most of which refer to its mace shaped flower head. Gray’s sedge care is minimal and as a landscape plant it is outstanding near a pond or water feature. Read on for some more Gray’s sedge information to see if this plant is right for your garden.

Grassy type plants provide airy elegance in many garden settings. Gray’s sedge (Carex grayi) is a native species that has funny star-like flower heads and arching to erect sword shaped foliage from which its genus name is derived. What is Gray’s sedge? This plant grows wild in wet to moist deciduous forests, along streams, swamps and boggy areas. The plant grows wild in more than half of eastern North America.

Gray’s sedge is named after Asa Gray, a notable American biologist. The plant is a perennial that can get up to 2 ½ feet (.76 meters). Leaves are semi-evergreen and broad, with a prominent midrib. The flowers are inconspicuous, lasting from spring through fall. The fruits add long season interest well into winter. They are spiky clubs that are useful in both fresh and dried arrangements. Most gardeners find growing Gray’s sedge around water features a spectacular use of the plant, especially in groups. It can also be used in containers, especially dish water gardens.

How to Grow Gray’s Sedge

This plant prefers full sun but can also perform well in partial shade. It requires rich, moist soil in United States Department of Agriculture zones 4 to 9. The more poorly drained the soil, the better the plant likes it, and it can even grow in marginal sites.

Occasionally, this sedge plant will self-seed, but propagation is more likely through division in spring. There are few pest or disease issues when growing Gray’s sedge.

It looks very attractive when mixed with other marginal or water plants, such as cattails or papyrus. Around a pond it can create cover for birds and small animals. The seed heads are a high food source for many aquatic and terrestrial birds.

Gray’s sedge is a low maintenance plant. The one thing it cannot tolerate, however, is drought and dry soil. Keep the plant well watered if growing in containers.

This sedge does not need frequent fertilization in moist, nutrient rich soils. A side dress of compost is sufficient to add supplemental nutrients.

If you don’t want the plant to self-seed, remove seed heads before they turn tan. For best appearance in cooler regions, cut the foliage back in late fall or early spring. Divide the plant every 3 to 5 years in spring to prevent center die-out and create more of these easy to grow plants.