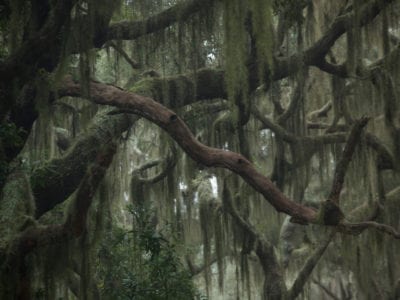 Often seen growing in trees in southern regions, Spanish moss is normally viewed as a bad thing. Oh contraire. Trees with Spanish moss can actually be welcome additions by adding something different to the landscape. That being said, there are still those who would prefer to get rid of it. So what is Spanish moss and is Spanish moss removal for you? Continue reading to learn more about Spanish moss and then decide for yourself.

What is Spanish Moss?

What is Spanish moss anyway? Spanish moss is an epiphytic plant that makes its own food from nutrients and moisture that it captures from the air and absorbs from surface cracks and crevices on the host plant. It clings to the supporting tree by wrapping itself around the branches.

So will Spanish moss kill a tree? Spanish moss is sometimes blamed for problems it didn’t cause. Spanish moss takes no nourishment or moisture from trees, and only uses them for protection and support. Therefore, since it doesn’t obtain nourishment from the host plant, it does little or no harm. In fact, a heavy growth of Spanish moss is often seen on trees that are declining in health, but it is not responsible for the decline, though it can, however, strain branches and make them weaker.

Spanish moss (Tillandsia usneoides) is not a true moss, but is a member of the bromeliad family along with tropical plants, such as pineapples. Trees with Spanish moss are a graceful and elegant sight. The tiny blue-green flowers are hard to see, but they give off a fragrance that is most noticeable at night. The plant drapes from the limbs of trees in masses that may be as much as 20 feet (6 m.) long.

Several species of songbirds use Spanish moss as nesting materials, and some build their nests in the clumps. Bats may also live in clumps of Spanish moss, and reptiles and amphibians use the plant as a hiding place. Unfortunately, if you experience severe itching after handling Spanish moss, you’ve discovered chiggers, or redbugs, which also live in the plant.

There is no chemical treatment to aid in Spanish moss removal, though herbicide sprays may be applied. The best way to remove Spanish moss is by hand. When the moss is growing on a tall tree, however, this can be a dangerous task and best left to a professional arborist.

Even after thorough removal, Spanish moss grows back after a few years. You can reduce the growth rate of Spanish moss by providing the host tree with proper fertilization and watering.

But instead of attempting a frustrating and ultimately futile attempt to remove the moss, why not try to enjoy the way this mysterious and graceful plant enhances the garden.