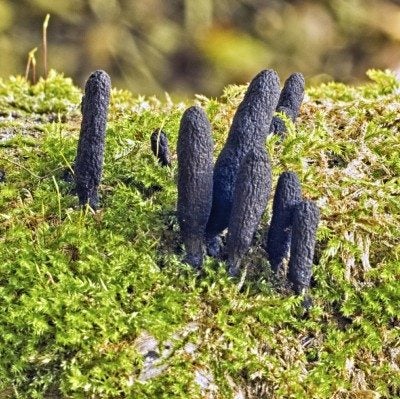 If you have black, club-shaped mushrooms at or near the base of a tree, you may have dead man’s finger fungus. This fungus may indicate a serious condition that needs your immediate attention. Read this article for dead man’s finger facts and tips for handling the problem.

What is Dead Man’s Finger?

Xylaria polymorpha, the fungus that causes dead man’s finger, is a saprotrophic fungus, which means that it only invades dead or dying wood. Think of saprotrophic fungi as natural sanitation engineers that clean up dead organic matter by breaking it down into a form that plants can absorb as nutrients.

The fungus shows a preference for apple, maple, beech, locust, and elm trees, but it can also invade a variety of ornamental trees and shrubs used in home landscapes. The fungus is the result of a problem rather than the cause because it never invades healthy wood. On trees, it often begins in bark lesions. It can also invade damaged roots, which later develop root rot.

A dead man’s finger “plant” is actually a mushroom. Mushrooms are the fruiting bodies (reproductive stage) of fungi. It is shaped like a human finger, each about 1.5 to 4 inches (4-10 cm.) tall. A clump of the mushrooms looks like a human hand.

The mushroom arises in spring. It may be pale or bluish with a white tip at first. The fungus matures to dark gray and then black. Trees infected with the disease show a gradual decline. Apple trees may produce a large number of small fruit before they die.

When you find dead man’s finger, the first thing you want to do is determine the source of the growth. Is it growing from the trunk of the tree or the roots? Or is it growing on the mulch at the base of the tree?

Dead man’s finger growing on the trunk or roots of a tree is very bad news. The fungus breaks down the structure of the tree quickly, causing a condition known as soft rot. There is no cure, and you should remove the tree before it becomes a hazard. Infected trees can collapse and fall without warning.

If the fungus is growing in hardwood mulch and is not connected to the tree, removing the mulch solves the problem.