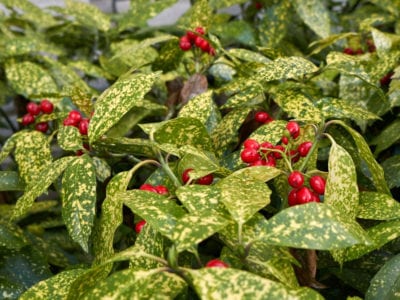 Aucuba is a lovely shrub that seems to almost glitter in the shade. Propagating aucuba cuttings is a snap. In fact, aucuba is one of the easiest plants to grow from cuttings. It roots readily in rooting medium or a jar of water, and you won’t need rooting hormones or an expensive misting system. If you’ve never rooted shrub cuttings before, aucuba makes a great “starter” plant. Read on for more Japanese aucuba propagation information.

You can take aucuba cuttings almost any time of year, but you’ll get the best results from the fast-growing stem tips cut in spring or from semi-ripe stems cut in summer. Cut 4 inch (10 cm.) tips early in the day, before the sun has a chance to dry them out.

Stick the cut stems in rooting medium or water following the directions below as soon as possible. If you can’t get to them right away, wrap them in a moist paper towel and place them in a plastic bag in the refrigerator.

Water isn’t the best medium for rooting the stems because the new roots won’t get enough oxygen. Stems rooted in water develop small, weak roots. If you decide to try it anyway, pot the cuttings up in potting soil as soon as the roots are an inch (2.5 cm.) long.

Recut freshly cut stem tips while holding them under water to remove any air locks that may have developed before placing them in a jar of water. Use a sharp knife rather than shears or scissors. Remove the lower leaves so that there will be no foliage under water.

How to Propagate Aucuba Japonica Cuttings in Rooting Medium

The best way to root aucuba cuttings is in rooting medium. They will develop stronger, healthier roots that won’t rot as easily.

Printer Friendly Version
Read more about Aucuba
<PreviousNext>
Did you find this helpful? Share it with your friends!
FacebookTweetPinEmail
Related Articles
Newest Articles
You might also like…
Additional Help & Information