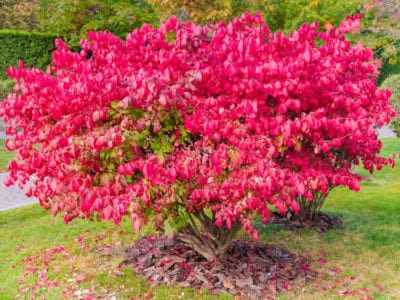 Burning bush shrubs have so much to recommend them: undemanding nature, brilliant fall color, naturally attractive shape… the list goes on and on. One of the problems you may have with these beautiful shrubs is insect pests. This article tells you what to do when you see insects on burning bush leaves.

Healthy burning bush plants don’t have a lot of problems with insects, but under the right circumstances, any plant can come under attack. Monitor the overall health of the plants and watch for insects and leaves that show evidence of insect feeding. Try to identify the problem before treating the pests of burning bush shrubs.

How to Treat Bugs on Burning Bush

Spider mites sometimes respond to a blast of water from a hose. If you find that this isn’t enough, treat the shrub with horticultural oil or insecticidal soap.

Euonymus caterpillars respond to Bacillus thuringiensis. Remove the webbing before treating the plant. You may be able to treat a small infestation with a blast from a water hose.

Try treating a small infestation of scale insects by spraying with insecticidal soap and then scraping off the insects with your thumbnail. Treat heavy infestations by pruning out the affected areas. You can also try treating the pest with horticultural oil. This method only works when the insects are in the crawling phase of their life cycle before they hide under their shells.

Aphids respond temporarily to neem oil, horticultural oil, or insecticidal soap. You’ll have to spray repeatedly at the interval indicated on the label to keep them at bay. Fortunately, they have a lot of natural enemies.

Since black vine weevils can’t fly, you can control them by keeping them from climbing the plant. Paint the bush with a sticky substance such as Tanglefoot in six-inch (15 cm.) bands.

Some burning bush insect pests, such as scale insects and aphids, have several natural enemies. Take care to preserve these “good insects” by avoiding the use of systemic insecticides. Systemics create a toxic situation that is bad for you and the environment, and they are often more effective at killing beneficial insects than insect pests.