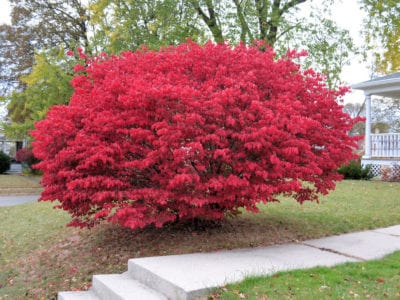 Burning bush has long been a popular ornamental shrub in many U.S. yards and gardens. Native to Asia, it produces stunning, flame-red foliage in fall along with pretty, red berries. Unfortunately, it has proven to be invasive in many areas and several states have restricted or banned it in landscaping. The good news is that there are plenty of native alternatives to provide similar fall color.

It depends on where you are, but generally yes, burning bush is considered invasive. Some states, like New Hampshire, have actually prohibited using this shrub. It has become widespread along the East Coast and in much of the Midwest.

Burning bush (Euonymus alatus) is also known as winged burning bush or winged euonymus for the tan, wing-like appendages that grow on young, green stems. The shrub can grow up to 20 feet (6 m.) tall, is deciduous, and is most known for its fiery red fall foliage and colorful berries.

So, is burning bush bad? Where it is invasive, yes, you can say it is bad. It outcompetes native species, plants that native wildlife need for food and shelter.

In your own yard, it may not be a big issue though. The berries of the burning bush drop down and reseed, resulting in seedlings that have to be pulled, which can be a hassle. The bigger problem is that birds carry seeds into natural areas where the bush grows out of control.

To control burning bush in your own yard, you only need to pull out seedlings and sprouts by hand. It’s not a bad idea to remove and replace entire bushes too. Dig them out by the roots and dispose of the whole plant.

In large areas where burning bush has spread, heavy equipment or herbicide may be needed for management.

There are some great native alternatives to the invasive burning bush. Try these in eastern and Midwest states to get similar growth habits, fall color, and berries for wildlife:

Printer Friendly Version
Read more about Burning Bush
<Previous
Did you find this helpful? Share it with your friends!
FacebookTweetPinEmail
Related Articles
Newest Articles
You might also like…
Additional Help & Information