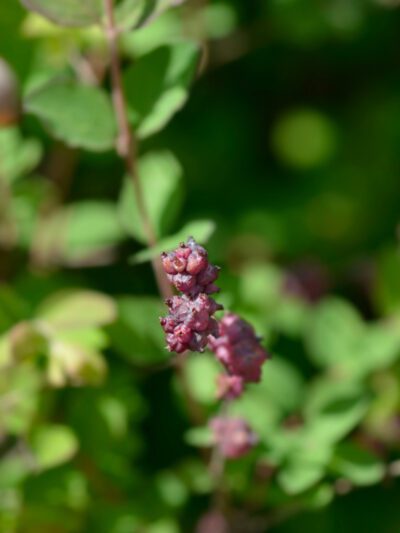 Indian currant, snapberry, buckleberry, wolfberry, waxberry, turkey bush– these are some of the plethora of names by which coralberry shrub may be alternately called. So, what are coralberries then? Keep reading to learn more.

Coralberry shrub (Symphoricarpos orbiculatus) is a member of the Caprifoliaceae family and is native to such areas of Texas, eastward to Florida and New England, and north again through Colorado and South Dakota. In its indigenous regions, coralberry shrub is considered to be more a weed than a garden specimen.

Growing coralberry plants thrive in clay and loam soils found in the understory or shaded areas of the woods. Coralberry shrubs have a spreading habitat, which may be useful as an erosion control method.

This shrubby ground cover has slender barked stems with greenish blue foliage that turns red in the autumn. Coralberry shrubs bear purplish pink berries at this time as well, and provide a lovely pop of color during winter months, although not a food source. Indian currant berries contain a toxin called saponin, which is also found in Digitalis (foxglove), and may be harmful to small animals or even humans. The dense thicket of growing coralberry plants, however, provides nesting sites for many rodents, other small mammals, and songbirds. Its flowers are frequented by butterflies and moths.

The mild toxin of coralberry shrubs also has mild sedation properties and, as such, the berries have been harvested by Native Americans and used as a treatment for eye pain. The dried roots, called devil’s shoestrings, have been used by indigenous peoples as a method for stunning the fish and making them easier to catch.

How to Grow Indian Currants

Growing coralberry plants is attractant to wildlife and a great groundcover which will arrest erosion concerns and is hardy in USDA plant hardiness zone 3. Care of coralberries also advises to plant in partial to full sun and avoid heavy clay or drier, limey soils, which may cause mildew in the plant.

Cutting the coralberry shrub to the ground in winter will encourage thicker, bushier plant growth as well as controlling several types of fungi that may infect the plants. Severe pruning will also help to tame its natural spreading habit, which is accomplished via underground stems.

This 2 to 6 foot (61 cm. to 1 m.) deciduous shrub has been cultivated since 1727 with several cultivars having specific characteristics such as compact growth habits or variegated foliage. Each coralberry shrub will spread at least 2 feet (61 cm.) wide, so account for this when planting.

Other info on how to grow Indian currants advises its tolerance to high heat and medium amounts of irrigation and its preference for a neutral to alkaline soil. Care of coralberries in the proper USDA zone is fairly simple and will provide you with spring color from the greenish white to pink blooms and on into fall with the bb sized berries of fuchsia shades.