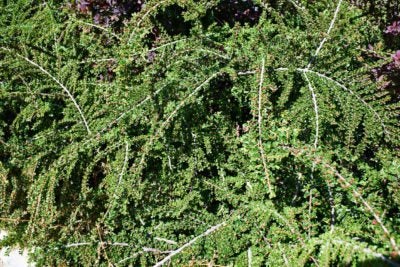 Cotoneaster comes in many different shapes and sizes, from creeping varieties to upright shrubs. Cotoneaster pruning is different depending on the type of plant you have in your backyard, although the goal for all varieties is to follow its natural form. If you want to learn how to prune cotoneaster, you’ve come to the right place. Read on for tips on cutting back cotoneaster.

Cotoneaster is not one of those shrubs that requires pruning to develop vigorous, strong branches. In fact, the shorter varieties of cotoneaster are creepers, without upright branches. To trim cotoneasters that are groundcover types, you want to keep the brakes on. Don’t get carried away with cotoneaster pruning here. Only dead or diseased branches should be removed, or those that detract from the natural symmetry of the plant.

Some types of cotoneaster are taller than creepers but still very short shrubs. Trim cotoneaster that is low-growing by removing a few of the oldest branches. Pruning a cotoneaster in this manner is best accomplished in spring, not winter.

If you want to try cutting back cotoneaster varieties that are upright, you have more options. Still, you should always use a light hand when pruning a cotoneaster. The upright shrubs have attractive natural shapes with beautifully arching branches. Dramatic or drastic cotoneaster pruning will destroy its beauty.

How to Prune Cotoneaster

When you start pruning a cotoneaster that is either a medium or a tall upright variety, be sure you know why you are pruning. These shrubs are most attractive as specimen plants when left virtually un-pruned, maintaining their flowing shape.

Prune to enhance the shrub’s natural form, not to re-shape it. It is perfectly fine to take out dead and diseased branches and to trim damaged branches to healthy wood. Trim cotoneaster in this way whenever you notice the problem.

All other significant pruning should be done in spring before flowering, and can be done as early as February. At this time you can trim cotoneaster’s longer, awkward branches back to side branches. Prune the branches just above new buds.

If you are wondering how to prune cotoneaster that appears to be overly dense, cut a few of the oldest branches. Pick branches in the center of the shrub and prune back to ground level.

Printer Friendly Version
Read more about Cotoneaster
<PreviousNext>
Did you find this helpful? Share it with your friends!
FacebookTweetPinEmail
Related Articles
Newest Articles
You might also like…
Additional Help & Information