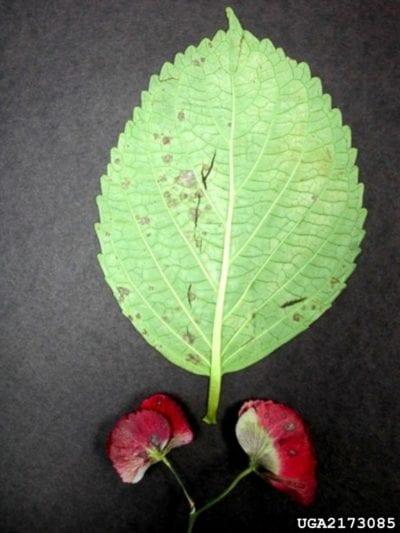 Hydrangeas are flowering shrubs that produce big, showy blooms in the summer, making them a much sought-after addition to the landscape. Gorgeous they may be unless you have a hydrangea with powdery mildew. The resultant powdery substance on hydrangeas afflicted with the disease renders them less than lovely.

A powdery substance on the plant is the number one symptom of hydrangeas with powdery mildew. This foliar disease may be caused by several pathogens: Golovinomyces orontii (formerly Erysiphe polygoni), Erysiphe poeltii, Microsphaera friesii, and Oidium hotensiae are most prevalent on the big leaf hydrangeas.

About Hydrangea with Powdery Mildew

The powdery substance on hydrangeas begins as small and fuzzy gray lesions on the upper surface of the foliage. These fuzzy lesions are made up of a web of fungal hyphae. The disease is easily spread by air currents and direct contact with other plants. As the disease progresses, plant growth slows or ceases, and flowering is reduced.

In the landscape, allow plenty of space between plantings to provide good air circulation and if need be move plants to a sunnier area. Also, remove plant debris that can harbor this and other foliar diseases. When possible, plant-resistant cultivars. The big leaf varieties of hydrangea tend to be more susceptible to hydrangea powdery mildew. Oakleaf varieties show more resistance.

When all else fails, treating powdery mildew on hydrangeas may require chemical control. There are a few options available, but none seem to be entirely capable of completely eradicating the disease.

Another option for treating powdery mildew is by making your own organic treatment. Combine two to three drops of dish soap with ½ tablespoon (7.5 mL.) of baking soda and ½ gallon (about 2 L.) of water. This will change the pH and prevent the mildew from forming or spreading. Mist leaves with the solution.