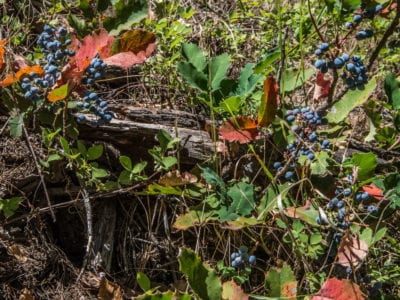 What is Oregon Grape?

Cascade Oregon grape plant (Mahonia nervosa) goes by several names: longleaf mahonia, cascade mahonia, dwarf Oregon grape, cascade barberry, and dull Oregon grape. Most commonly the plant is simply referred to as the Oregon grape. Oregon grape is an evergreen shrub/ground cover that is slow growing and only reaches about 2 feet (61 cm.) in height. It has long, jagged glossy green leaves that take on a purple tint during the winter months.

In the spring, April through June, the plant flowers with tiny yellow blooms in erect terminal clusters or racemes followed by waxy, blue fruit. These berries look much akin to blueberries; however, they taste like anything but. While they are edible, they are extremely tart and historically used more medicinally or as a dye than as a food source.

Cascade Oregon grape is commonly found in secondary growth, under the closed canopies of Douglas fir trees. Its native range is from British Columbia to California and east into Idaho.

The secret to growing this shrub is to mimic its natural habitat. Since this is an undergrowth plant that thrives in a temperate environment, it is hardy to USDA zone 5 and thrives in partial shade to shade with plenty of moisture.

Cascade Oregon grape plant will tolerate a wide array of soil types but flourishes in rich, slightly acidic, humus-rich, and moist but well-draining soil. Dig a hole for the plant and mix in a good amount of compost before planting.

Care is minimal; in fact, once established, Oregon grape is an extremely low-maintenance plant and an excellent addition to native-planted landscapes.