Does Cold Affect Oleander: Are There Winter Hardy Oleander Bushes 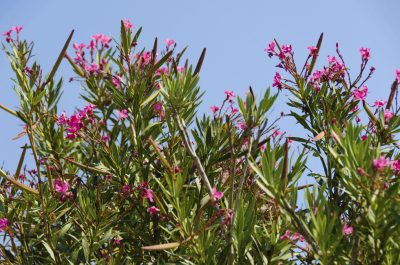 Few plants can rival the showy flowers of oleander shrubs (Nerium oleander). These plants are adaptable to a variety of soils, and they flourish in heat and full sun while also being drought-tolerant. Although the shrubs are usually grown in the warmer regions of USDA hardiness zones, they often perform surprisingly well a bit outside this comfort zone. Read on to learn more about oleander winter hardiness.

How Cold Can Oleanders Tolerate?

In their perennial range across oleander hardiness zones 8-10, most oleanders can only handle temperatures that dip no lower than 15 to 20 degrees F. (10 to -6 C.). Sustained exposure to these temperatures can damage plants and inhibit or reduce flowering. They perform best when planted in full sun, which also helps melt the frost formation more quickly than when planted in shady areas.

Even a light dusting of frost can burn the developing leaf and flower buds of oleander. During heavy frosts and freezes, plants may die back all the way to the ground. But in their hardiness range, oleanders that die to the ground typically don’t die all the way to the roots. In spring, the shrubs will likely re-sprout from the roots, although you may want to remove the unsightly, dead branches by pruning them away.

The most common way that cold affects oleander is during early spring cold snaps after plants have begun warming up in late winter. This sudden reversal of temperature may be the sole reason oleander shrubs don’t produce flowers in the summer.

Tip: Place a 2- to 3-inch (5 to 7.5 cm.) layer of mulch around your oleander shrubs to help insulate the roots in regions where they are less hardy. This way, even if the top growth dies back to the ground, the roots will be better protected so the plant can re-sprout.

Oleander winter hardiness can vary, depending on the cultivar. Some winter hardy oleander plants include:

Toxicity: You’ll want to wear gloves when handling an oleander shrub because all parts of the plant are toxic. If you prune cold-damaged limbs, don’t burn them because even the fumes are toxic.