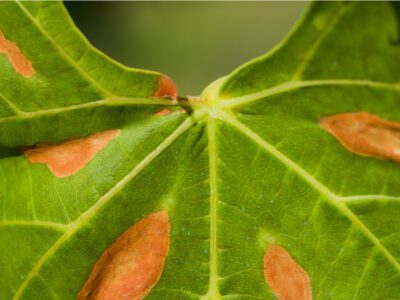 What causes Xylella fastidiosa diseases, of which there are several, is the bacterium of that name. If you grow grapes or certain fruit trees in an area with these bacteria, you need Xylella fastidiosa info so that you can recognize signs of disease and practice good management.

What is Xylella Fastidiosa?

Xylella fastidiosa is a bacterium that infects and causes diseases in plants. It is mostly an issue in the southeastern U.S. but can infect plants in other areas too, including the Midwest and Ontario.

As the name Xylella suggests, this is a bacterium that sets up shop in the xylem of plants, the vascular tissue that moves water and nutrients up from the roots. The bacteria are transferred and spread to new hosts by leafhoppers because they feed on xylem tissue.

The symptoms of the plants infected by Xylella depend on the plant and the disease. These bacteria cause a number of different diseases:

Unfortunately, there is no treatment for diseases caused by Xylella fastidiosa. The main goal of management is to prevent its spread, but when the infestation is heavy, it can be nearly impossible. Diseased fruit trees and vines can be removed and destroyed to stop or slow the spread of infection.

Preventative steps are mostly aimed at deterring leafhoppers. Keep areas under trees and vines weeded to keep them at bay. Avoid pruning trees in the summer, as the new growth attracts the hungry insects. For grapes, you can choose varieties that resist the disease, including muscadine or bunch grapes with Tampa, Lake Emerald, or Blue Lake rootstocks. You may also choose to use insecticides to eliminate the disease-transmitting pests.