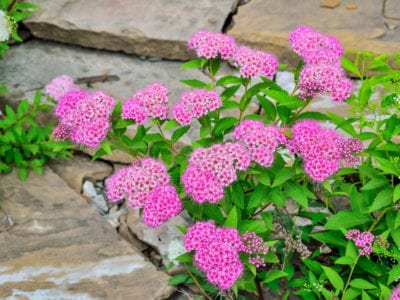 Japanese spirea is a small shrub native to Japan, Korea, and China. It has become naturalized throughout much of the northeast, southeast, and Midwestern United States. In some states its growth has become so out of control it is considered invasive and folks are wondering how to stop the spread of Japanese spirea. Managing Japanese spirea or other methods of spirea control are reliant on learning about how the plant propagates and distributes.

Japanese spirea is a perennial, deciduous shrub in the rose family. It generally attains a height of four to six feet (1-2 m.) across and wide. It has adapted to disturbed areas such as those along streams, rivers, forest borders, roadsides, fields, and areas of power lines.

It can rapidly take over these disturbed areas and overtake native populations. One plant can produce hundreds of tiny seeds that are then dispersed via water or in fill dirt. These seeds are viable for many years which make managing Japanese spirea difficult.

How to Control Japanese Spirea

Japanese spirea is on the invasive list in Kentucky, Maryland, North Carolina, New Jersey, Pennsylvania, Tennessee, and Virginia. It grows rapidly, forming dense stands creating shade that impedes the growth of native plants and causing an ecological imbalance. One way to stop the spread of this plant is not to plant it at all. However, given that seeds survive in the soil for many years other routes of control must be utilized.

In areas where the population of spirea is sparse or in areas that are environmentally susceptible, one way to stop the spread of Japanese spirea is to cut or mow the plant. Repeated mowing of the invasive plant will slow its spread but not eradicate it.

Once spirea has been cut back it will re-sprout with a vengeance. This means this method of managing will be never ending. Stems need to be cut back at least once each growing season prior to seed production as close to the ground as possible.

Another method of spirea control is the use of foliar herbicides. This should only be considered where the risk to other plants is minimal and when there are large, dense stands of spirea.

Foliar applications can be made at most any time of the year provided the temperature is at least 65 degrees F. (18 C.). Effective herbicides include glyphosate and triclopyr. Follow the manufacturer’s instructions and state requirements when using chemical controls to stop the spread of Japanese spirea.

Printer Friendly Version
Read more about Spirea
<Previous
Did you find this helpful? Share it with your friends!
FacebookTweetPinEmail
Related Articles
Newest Articles
You might also like…
Additional Help & Information