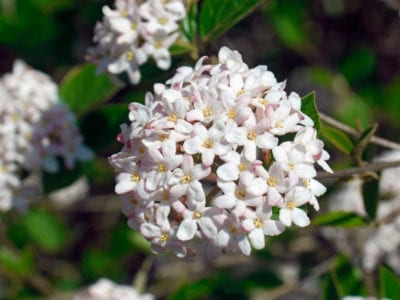 Viburnums have layered branches that are coated in spring with lacy, delicate, and sometimes scented flowers. They are remarkably tough plants and suffer from few pest and insect issues. There are more than 150 species of Viburnum with many available for problem areas of the garden. Plants that are not well taken care of, however, can occasionally develop viburnum diseases, primarily fungal issues, especially if circulation is not provided.

Viburnum shrubs are very adaptable plants. That means they rarely have any disease issues. Common viburnum bush diseases encompass those caused by fungus, while other disease issues are rare. In most cases, correct siting of plants, adequate air circulation, and good watering practices can prevent these soil or air borne problems. Plants under stress are most prone to lasting damage from these types of illnesses.

The most prevalent diseases affecting viburnums are fungal diseases of the foliage.

The viburnum disease treatment for these types of plants is all the same. Avoid overhead watering, apply fungicide if the disease is rampant, and destroy damaged leaf material.

One of the most damaging diseases of viburnum is Armillaria root rot, also known as shoestring root rot or mushroom root rot. This is another fungus, but it affects the roots of the plant and can lead to death. Initially, the leaves and stems of the plant will appear stunted, yellow, and leaves may drop to the ground. As the disease works on, the roots of the bush will gradually get sicker and sicker. The process can take several years but eventually the tree will die.

It can be hard to diagnose, as symptoms mimic other stresses such as lack of water or poor care. The upper crown and roots of the plant will pinpoint the cause if examined, however, and white fungal growth will be visible under the bark. If the root system is diseased and making its way into the trunk, the plant cannot be saved. This is one of the most dangerous of the viburnum bush diseases.

Botryosphaeria canker is a serious disease of viburnum and many other ornamentals. It is characterized by dead or wilted leaves. The fungus produces fruiting bodies that show up on bark and branches as brown to black, plump bumps. Bark becomes dark brown. The fungus gets into the plants through some injury and destroys the cambium. Cankers form, which girdle the tree, effectively cutting off nutrients and water movement.

Drought stressed bushes are mostly affected. Prune off affected material with sterilized pruners and provide consistent water and fertilizer over the season. There is no viburnum disease treatment for this ailment, but once the plant gains health, it can usually withstand the fungal attack.