How To Tell Snowball Bushes Apart: Is It A Snowball Viburnum Bush Or Hydrangea 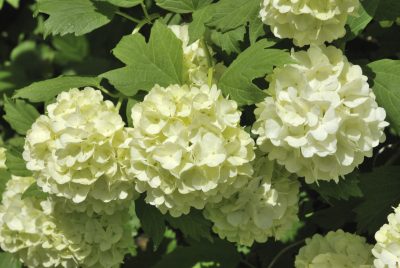 The problem with using common plant names instead of the tongue-twisting Latin names that scientists assign them is that similar-looking plants often wind up with similar names. For instance, the name “snowball bush” can refer to a viburnum or a hydrangea. Find out the difference between viburnum and hydrangea snowball shrubs in this article.

The old-fashioned snowball bush (Hydrangea arborescens), also called Anabelle hydrangea, produces large clusters of flowers that start out pale green and turn white as they mature. The Chinese snowball viburnum bush (Viburnum macrocephalum) is similar in appearance and also produces flowers that start pale green and age to white even though the two plants aren’t related. If you’re wondering how to tell snowball bushes apart, take a look at these characteristics:

These two shrubs have similar requirements: they like light shade and moist but well-drained soil. Viburnum can tolerate drought in a pinch, but hydrangea is insistent about its moisture.

The big difference is in the way the two shrubs are pruned. Cut hydrangeas back hard in late winter. This encourages them to come back lush and leafy in spring. Viburnums, on the other hand, need pruning right after the flowers fade. If you wait too long, you could lose next year’s beautiful flush of flowers.