Hicksii Yew Information: How To Care For Hicks Yew Plants 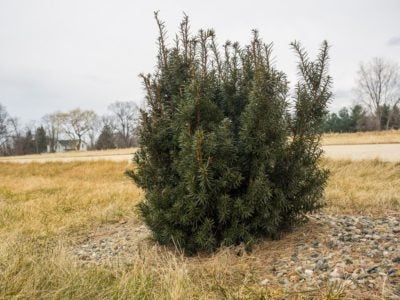 Even if you never heard of Hicks yew (Taxus × media ‘Hicksii’), you may have seen these plants in privacy screens. What is a hybrid Hicks yew? It’s an evergreen shrub with long, upright-growing branches and dense, shiny foliage. It’s an excellent choice for tall hedges. If you want more Hicksii yew information, read on.

What is a Hybrid Hicks Yew?

Homeowners looking for evergreen shrubs might want to consider growing a Hicks yew. This tall, evergreen shrub with flattened needles and scale-like foliage is perfect for privacy hedges. The Hicksii yew, commonly called the Hicks yew, can play many different roles in your backyard, however. It is tall and narrow, and its columnar shape works well in any type of foundation planting.

According to Hicksii yew information, the shrubs have dense needles, dark green and glossy. This makes them a great backdrop plant for other garden favorites. They also accept all types of pruning, and a shrub can also be trimmed into ornamental topiary.

The shrubs are truly ornamental in and of themselves. In autumn, female yews produce bright red berries that offer stunning color and contrast. These shrubs also tolerate more shade than most evergreens.

If you live in a very warm climate, you probably don’t want to start growing a Hicks yew. According to Hicksii yew information, these shrubs thrive in U.S. Department of Agriculture plant hardiness zones 4 through 7.

Select your planting site with care. Hicksii yew plants grow best in full sun, although they tolerate some shade. The shrubs will grow slower in shade, but pruning can even out a hedge planted in an area of mixed exposure.

These shrubs can grow to 10 to 12 feet (3-4 m.) tall and one-third as wide, but their growth rate is slow. It is possible to keep them shorter with trimming.

How to Care for Hicks Yew

Yew plant care is not difficult. It’s an easy-going plant that requires little upkeep. If you are wondering how to care for Hicks yew, you’ll be happy to learn that they come loaded with their own natural defenses against disease and insects.

Pruning can be an important part of yew plant care, or it can be a small part. Pruning yews is entirely up to you. You can let the plant grow naturally into its tall, graceful shape or you can invest time and effort in giving it a heavy shearing.

A durable evergreen, the Hicksii yew really doesn’t need much plant care. It even thrives in city environments and accepts fairly high levels of pollution.

Printer Friendly Version
Read more about Yews
<Previous
Did you find this helpful? Share it with your friends!
FacebookTweetPinEmail
Related Articles
Newest Articles
You might also like…
Additional Help & Information