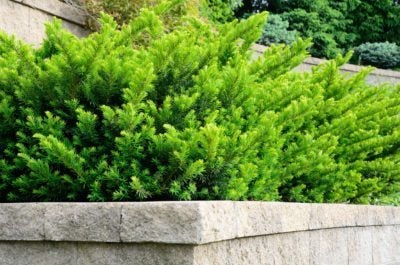 Nothing is more useful in a garden than an easy-care evergreen that does just fine in shady sites. Taunton yew shrubs fit the bill as short, attractive evergreens with a nice spreading form that tolerate shade. For more information, including tips on the care for Taunton yew, read on.

Taunton yew shrubs (Taxus x media ‘Tauntonii’) have many features that make them a delight in your backyard or garden. They are also known by the common name Taunton’s yew. Those growing Taunton yews love the shrubs’ deep green needles, which seem to resist summer burn and winter freeze damage.

Taunton yew shrubs grow some 3 to 4 feet (1 m.) tall and 5 to 6 feet (1.5-2 m.) wide, spreading out in a graceful, rounded form. Foliage is dark bluish green. It grows in densely to give the plants a compact appearance.

You can start growing Taunton yews if you live in U.S. Department of Agriculture plant hardiness zones 4 through 7. Some gardeners report that they can also survive in zone 3.

One of the most compelling features of these shrubs is their tolerance of shade. Those growing Taunton yew can plant them in sun or in a location with shade and get equally good results. For best Taunton yew care, install these shrubs in moist soil, ideally sandy loam, with excellent drainage. Avoid wet growing conditions since this can kill the shrubs.

Taunton yew care is not difficult if the shrubs are sited appropriately. They do better if you protect them from winter winds, so select a sheltered location. Once in place and established, Taunton yew requires minimal care. However, regular irrigation is an essential element of care, particularly in the first seasons after transplant.

Those growing Taunton yews must plan on weekly watering. You may have to water even more frequently in extreme heat.

Pruning is not an essential part of care for Taunton yews, but they do accept pruning. If you prefer a neat, tidy appearance, you can make an annual shearing a part of your care routine. Prune in summer for best results.