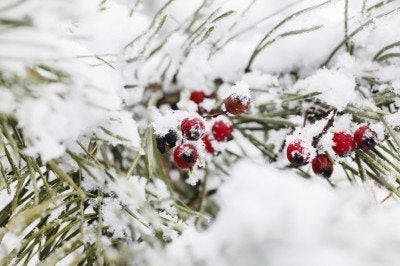 Winter’s chill can harm many types of trees, including yews. Contrary to what you might think, winter injury to yews doesn’t generally follow an extremely cold winter. This winter injury occurs after extreme temperature fluctuations rather than prolonged cold weather. Browning of yews may be caused by many other factors as well. Read on for information about yew winter damage.

Winter damage can and does affect yews, generally presenting as browning of the foliage. Yew winter damage is the result of rapidly changing temperatures during the winter. It is also caused by bright sunshine and inadequate water reserves in the yew’s root system.

You usually see the first symptoms of winter injury to yews in late winter or early spring. With winter burn on yews, you will notice that the browning is most pronounced on the south and west sides of the plants.

Yew winter damage may not be always be caused by fluctuating temperatures but by salt. Yews are sensitive to salt used for deicing roads and sidewalks. You can tell if your winter burn on yews was caused by salts since salt-burned plants will turn brown on the side closest to the salted area. Symptoms usually first appear in the spring. If the deicing salts get into the soil under a yew tree, you should flush it out by giving the tree generous amounts of water.

Yew trees turning brown is not always a result of winter injury either. When animals or people with weed whackers wound the bark of yew trees, portions of the tree can turn brown. Yews do not tolerate wounds very well. To diagnose this injury, look closely at the base of the plant to see if you can see an injury.

Because browning of yew branches can be caused by so many different things, you have to review the tree’s growing location and recent history in order to figure out what is going on.

The most important thing to remember when you are treating winter damage on yews is to have patience. The yews may look as if they are dead when the foliage turns brown, but don’t reach for the saw or pruners. Your best bet is to wait. If the yew’s buds remain green and viable, the plant can recover in springtime.