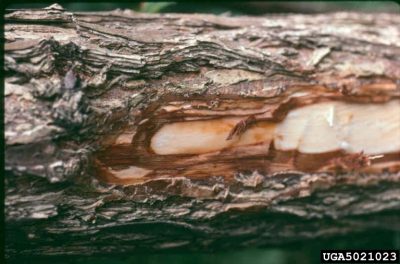 Elm yellows is a disease that attacks and kills native elms. Elm yellows disease in plants results from Candidatus Phyloplasma ulmi, a bacteria without walls that is called a phyoplasma. The disease is systemic and lethal. Read on for information about the symptoms of elm yellow disease and whether there is any effective elm yellows treatment.

The hosts of elm yellows phytoplasma in the United States are limited to elm trees (Ulmus spp.) and the insects that transport the bacteria. White-banded elm leafhoppers transport the disease, but other insects that feed on the inner elm bark – called phloem – may also play a similar role.

Native elms in this country have not developed a resistance to the elm yellows phytoplasma. It threatens elm species in the eastern half of the United States, often killing trees within two years after the initial symptoms appear. Some species of elm in Europe and Asia are either tolerant or resistant.

Elm yellows phytoplasma attack trees systematically. The entire crown develops symptoms, usually beginning with the oldest leaves. You can see symptoms of elm yellow disease in leaves during the summer, mid-July through September. Look for leaves that turn yellow, wilt, and drop before they should.

The leaf symptoms of elm yellow disease are not very different from problems caused by too little water or nutrient deficiencies. However, if you look at the inner bark, you will see elm phloem necrosis even before the leaves yellow.

Another one of the typical symptoms of elm yellow disease is the smell. When moist inner bark is exposed (due to elm phloem necrosis), you will notice an odor of wintergreen oil.

Unfortunately, no effective elm yellows treatment has yet been developed. If you have an elm that is suffering from elm yellows disease in plants, remove the tree immediately to prevent the elm yellows phytoplasma from spreading to other elms in the area.

If you are just planting elms, select disease resistant varieties from Europe. They may suffer from the disease but it will not kill them.