Common Ginkgo Cultivars: How Many Kinds Of Ginkgo Are There 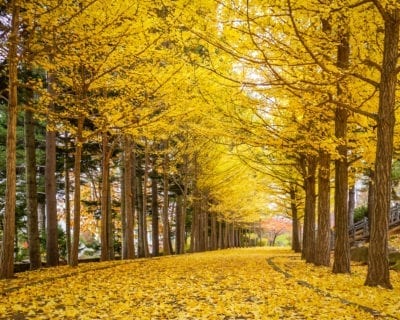 Ginkgo trees are unique in that they are living fossils, largely unchanged for nearly 200 million years. They have pretty, fan-shaped leaves and trees are either male or female. In the landscape, different kinds of ginkgo can be big shade trees and attractive ornamental additions to gardens. There are several varieties from which you can choose.

A ginkgo tree can grow up to 80 feet (24 m.) high and 40 feet (12 m.) wide, but there are also smaller varieties. All have the special, fan-shaped leaves. Ginkgo leaves turn vibrant yellow early in the fall, and they do well in urban environments. They require minimal care once mature.

One important consideration when choosing a ginkgo tree of any variety is the fact that mature female trees produce fruit. The fruit begins to develop after about twenty years and it can be pretty messy. Many would also describe the smell as unpleasant.

A male ginkgo tree is a great addition to most gardens. You can even choose the growth habit, size, and other characteristics by selecting from among several types of ginkgo tree:

Male and female ginkgo cultivars often have different names, so be sure you select a male tree if you want one that is low maintenance and won’t produce fruit.