How To Get Rid Of Smelly Ginkgo Biloba Fruit 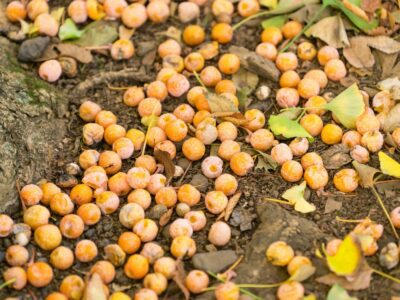 Few trees are more intriguing than the ginkgo biloba, an ancient species dating back 270 million years and the sole species in the division Ginkgophyta to escape extinction. Graceful and lovely, with unique, fan-shaped leaves, the ginkgo is a popular shade tree with only one downside: the ginkgo fruit odor.

It is entirely possible to avoid the ginkgo smell with a little planning. Eliminating the odor in a stinky ginkgo, however, is more difficult and can prove daunting. Read on for information about which ginkgo stinks and what – if anything! – a homeowner can do about it.

The ginkgo biloba is the favorite tree of many a tree lover. It is considered a “living fossil” since its fossilized leaves (in an unusual fan shape) were found long before a living ginkgo was identified, making scientists believe the species to be extinct. Today, ginkgo trees thrive on all continents other than Antarctica and Australia.

The ginkgo is a deciduous tree with a slender trunk and a full canopy of fan-shaped leaves during the growing season. They appear in spring in a vibrant green but blaze into brilliant yellow in autumn.

Despite their beauty, ginkgo biloba trees have one quality that creates problems in a backyard or garden: the ginkgo fruit odor. Since ginkgo trees do not fruit until mature, the ginkgo smell can come as an awful surprise to those who don’t read up on the trees before planting.

The problem appears in winter when the fruit/seed pod of the ginkgo falls to the ground and, over the next few months, ripens. Even those who admire the ginkgo call the ripe fruit smell a pungent odor similar to that of rancid butter or animal poop. The stinky ginkgo smell can totally overwhelm a yard or garden.

While the pervasive odor of the stinky ginkgo fruit may be enough to make a homeowner swear off ginkgo trees forever, there is a simple solution for those who plan ahead. Only the female ginkgo bears fruit. That means that the entire mess can be avoided by selecting a male ginkgo rather than a female.

This is easier to do than you might think as several cultivars produce only male trees, including ‘Autumn Gold’ and ‘Lakeview.’ However, if you simply elect to buy a tree labeled “male,” be warned: if a male scion is grafted to a female rootstock, the rootstock may take over as the tree grows and turn the male into a female.

Is there some easy way to get the female to stop fruiting? Or get the fruit to stop smelling? Sadly, there is not. Some products are available in commerce that are supposed to stop fruiting, but there is not much data on the level of success. Some cities spray their trees with a chemical called Shield Potato Sprout Inhibitor that is supposed to prevent ginkgo fruit from maturing. However, this type of spraying is difficult for a homeowner to accomplish on their own.

In sum, there is no tried-and-true way to prevent a female gingko from fruiting. Those just planting gingko trees, nevertheless, can avoid the stinky ginkgo problem by planting male cultivars.

Printer Friendly Version
Read more about Ginkgo
<Previous
Did you find this helpful? Share it with your friends!
FacebookTweetPinEmail
Related Articles
Newest Articles
You might also like…
Additional Help & Information