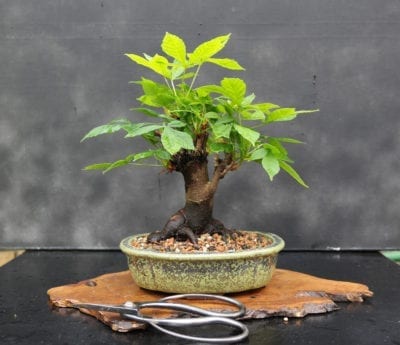 Bonsai gardening is a rewarding hobby that provides years of enjoyment. Newcomers to the art of bonsai might have some trepidation about using an expensive specimen for their first attempt. That’s when looking around for local seeds or a seedling comes into play. Many native trees can become beautiful bonsai for little cost. Take the horse chestnut, for example. Can you grow a horse chestnut bonsai?

Can You Grow a Horse Chestnut Bonsai?

The (white) horse chestnut is a hardy, deciduous tree commonly found in forests, parks, and along roadsides. In the fall, the tree drops conkers that are surrounded by a green, prickly husk. When the husks fall to the ground, they often burst open revealing the smooth, brown nuts within.

Collect some undamaged chestnut conkers and plant them deep enough in a seed box to be completely covered by soil. Keep the soil moist and cover the box with plastic to retain moisture. Place the box in a sheltered area outside. Continue to keep the soil moist as needed. The seeds will need a period of cold to signal that it is time to germinate, so be patient and/or stratify the seeds prior to planting them.

After some time, two round leaves, cotyledons, will appear followed by the first true leaves. When these leaves are full sized, the little seedling can be potted. Gently remove the plant from the seed box and replant in a pot with regular soil. Water the newly potted seedling and place it outside. Protect the seedling from frost and heavy rain if need be.

After about a year, the seedlings will be about 4 to 6 inches (10-15 cm.) tall. In the successive year, when the plant sprouts, cut off most of the leaves with the exception of three pairs. Keep the dormant buds which grow smaller leaves. This is a signal to the plant to push out smaller leaves next time. Keep pruning leaves until midsummer, any leaves growing after this can be left until the following year.

When the plant outgrows its small transplant pot, it’s time to repot. First, cut back about two-thirds of the taproot and then repot the plant in a well-draining bonsai soil. In the next year, remove the first leaves to emerge but keep a piece of the stem attached to the plant. Pruning allows the branches to grow. After four years, the tree can be wired.

Horse chestnut trees should be kept in an area outside that has shade in the afternoon so the leaves won’t burn. At the beginning of mid-autumn, move the bonsai to a sheltered area that will protect it from cold wind and heavy frosts.

Keep the trees watered on a regular basis and fertilize with an organic fertilizer.

If you are interested in learning the art of bonsai, it is a good idea to make your first attempt with a specimen such as horse chestnut that is less costly. This way if the endeavor doesn’t work out, you aren’t out too much money. It is also a good idea to start more than one horse chestnut bonsai in case of unforeseen events.