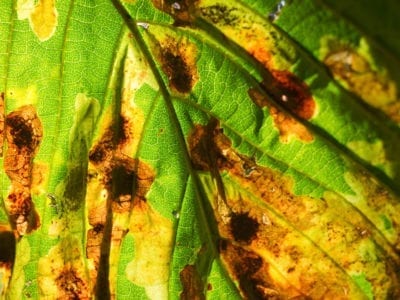 What’s Wrong with My Horse Chestnut?

Horse chestnut trees, also called conker trees, are imposing. They can rise to 50 feet (15 meters) or more, with an equal spread. Their wide branches and lovely palmate leaves make them excellent shade trees.

Leaf blotch often appears in combination with horse chestnut leaf miner, a tiny moth. The moth caterpillars tunnel into the leaves to feed, usually in spring. Leaves shrivel up and fall early. If you hold the damaged leaf to the sun, you should be able to see through the area. You might even be able to see the leaf miner larvae in the foliage holes. This appears first on lower branches, then spreads up the tree.

Another of the common horse chestnut bugs is the horse chestnut scale. It is caused by the insect Pulvinaria regalis. The female lays her eggs in spring and the young feed on the leaves. This pest also disfigures the tree, but it does not kill it.

Other common pests include Japanese beetles, which can quickly defoliate the tree, and tussock moth caterpillars, which also feed on the foliage.

The presence of parasitic wasps can help reduce leaf miner numbers. Horse chestnut leaf miners can be controlled through regular fall and winter cleanup of fallen leaves. Infected leaves should be disposed of; burning is recommended. Systemic insecticides can be applied early in the growing season but may need to be repeated in summer.

Horse chestnut scale can also be minimized with parasitic wasps but, most often, the use of systemic insecticide or insecticidal soap is applied in spring to midsummer, followed by a second treatment within 14 days.

Japanese beetles are difficult to control, though their numbers can be slowed if their larva (grub worms) are targeted in fall. Most caterpillar pests can be managed with Bacillus thuringiensis.