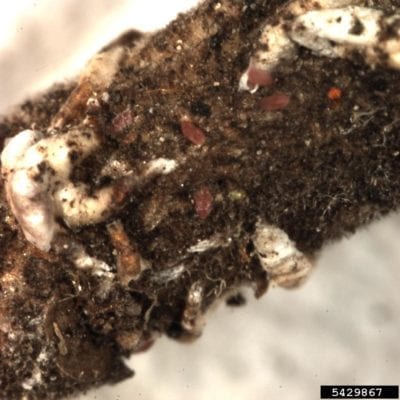 A Japanese maple is a glorious specimen tree. Its red, lacy leaves are a welcome addition to any garden, but they aren’t problem free. There are a few Japanese maple diseases and several insect problems with Japanese maples that you should be aware of to give your tree the care it needs.

There are several possible insect problems with Japanese maples. The most common Japanese Maple pests are the Japanese beetles. These leaf feeders can destroy the looks of a tree in a matter of weeks.

Wilting leaves, or leaves that are curled and puckered, may be a sign of another common Japanese maple pest: aphids. Aphids suck plant sap from the tree and a large infestation can cause distortions in tree growth.

Tiny clumps of sawdust indicate borers. These pests drill into the bark and tunnel along the trunk and branches. At worst, they can cause the death of branches or even the tree itself by girdling the limb with their tunnels. Milder cases can cause scarring.

A strong spray of water and regular treatment with either chemical or organic pesticides will go a long way to prevent insect problems with Japanese maples.

The most common Japanese maple diseases are caused by fungal infection. Canker can attack through bark damage. Sap oozes from the canker in the bark. A mild case of canker will resolve itself, but heavy infection will kill the tree.

Verticillium wilt is another common Japanese maple disease. It is a soil dwelling fungus with symptoms that include yellowing leaves that fall prematurely. It sometimes affects only one side of the tree, leaving the other looking healthy and normal. Sap wood may also become discolored.

Moist, sunken bruising on leaves is a sign of anthracnose. The leaves eventually rot and fall. Again, mature Japanese maple trees will probably recover but young trees may not.

Proper annual pruning, cleaning up of fallen leaves and twigs, and yearly replacement of mulch will help prevent the infection and spread of these Japanese maple tree diseases.

Printer Friendly Version
Read more about Japanese Maple
Next>
Did you find this helpful? Share it with your friends!
FacebookTweetPinEmail
Related Articles
Newest Articles
You might also like…
Additional Help & Information