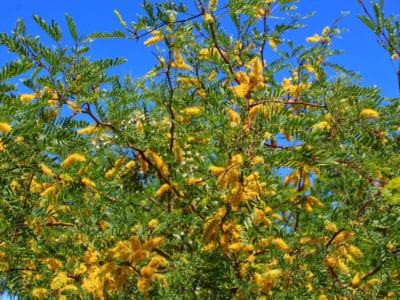 Mesquite trees (Prosopis ssp.) are members of the legume family. Attractive and drought-tolerant, mesquites are a standard part of xeriscape plantings. Sometimes, though, these tolerant trees exhibit signs of mesquite sickness. Mesquite tree diseases run the gamut from bacterial slime flux to different types of soil-borne fungi. Read on for information about diseases of mesquite trees and how to recognize them.

Your best bet for keeping your mesquite tree healthy is to provide it with an appropriate planting location and excellent cultural care. A strong, healthy plant won’t develop mesquite tree illnesses as readily as a stressed tree.

Mesquites require deep watering every so often. And adequate irrigation allows the trees to grow to their full mature height. All mesquites do well in hot weather, as long as you provide adequate water. When mesquites are water-stressed, the trees suffer. If you are treating a sick mesquite tree, the first thing to check is whether it is getting sufficient water.

One of the common diseases of mesquite trees is called slime flux. This mesquite tree illness is caused by a bacterial infection of the sapwood in mature trees. Slime flux bacteria live in the soil. They are thought to get into the tree through wounds at the soil line or pruning wounds. In time, the affected parts of the mesquite start to look water-soaked and exude dark brown liquid.

If you want to start treating a sick mesquite tree with slime flux, remove seriously infected branches. Avoid this mesquite tree illness by taking care not to wound the tree.

Other mesquite tree diseases include Ganoderma root rot, caused by another soil-borne fungus, and spongy yellow heart rot. Both of these diseases enter the mesquite through wound sites. The signs of mesquite sickness from root rot include a slow decline and eventually death. No treatment has proved helpful results for infected trees.

Other diseases of mesquite trees include powdery mildew, in which infected leaves are covered with a white powder. Signs of this mesquite sickness include distorted leaves. Control it with benomyl if you like, but the disease doesn’t threaten the mesquite’s life.

Mesquite can also get leaf spot, another fungal disease. You can control this also with benomyl, but it isn’t usually necessary given the limited nature of the damage.

Printer Friendly Version
Read more about Mesquite
<Previous
Did you find this helpful? Share it with your friends!
FacebookTweetPinEmail
Related Articles
Newest Articles
You might also like…
Additional Help & Information