Mesquite Winter Care: How To Overwinter A Mesquite Tree 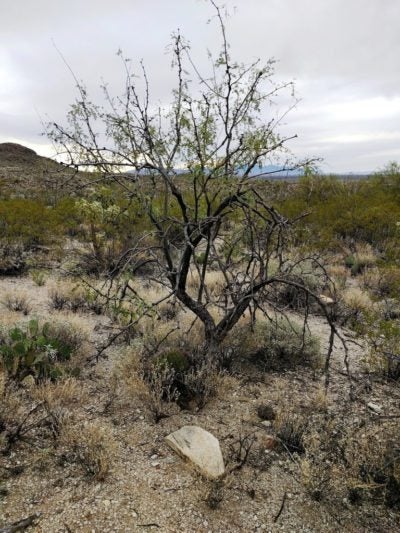 Mesquite trees are tough desert trees especially popular in xeriscaping. Known mostly for their distinctive flavor and scent used in barbecues, they are also known for their attractive seed pods and interesting branching canopy. How do you treat your mesquite tree in the winter though? Keep reading to learn more about mesquite winter care and how to overwinter a mesquite tree.

How to Overwinter a Mesquite Tree

Mesquite tree hardiness varies from species to species, but they are mostly hardy from zones 6 through 9. This means that they can tolerate well below freezing temperatures in the winter. If mesquite can survive outdoors in your climate, then you should grow it in the landscape.

If you live in zone 5 or below, you will have something of a hard time. Since they have such a long taproot and large root system, mesquite trees are extremely difficult to grow in containers. If you need to bring your tree indoors for winter, you can attempt it, but success isn’t guaranteed beyond a couple years of growth.

You will probably have better luck overwintering mesquite trees outdoors in the ground with lots of protection in the cold months. Mulch your tree heavily, wrap it in burlap, and screen it from winter winds.

Growing mesquite trees in winter is relatively easy, although how the tree reacts will depend upon how harsh or mild your winters are. If your winters are exceptionally mild, your tree may not lose its foliage until it grows new leaves in the spring, giving it the appearance of being evergreen.

If temperatures are colder, the tree will lose some or all of its leaves. In the coldest climates, it will go dormant for six to eight weeks. If you water your tree, it needs much less irrigation during the winter, particularly if it goes dormant.

You may want to give it a light pruning in midwinter in preparation for a heavier pruning in the spring. Mesquite trees are very prone to wind damage, and keeping the branches trimmed back will help to prevent breakage in the winter winds.