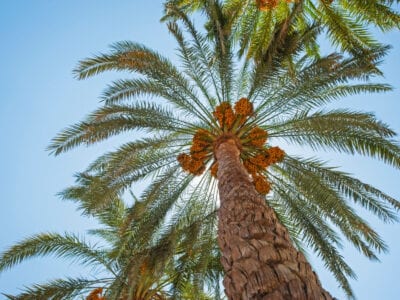 Lethal yellowing is a tropical disease that affects several species of palm. This disfiguring disease can devastate landscapes in South Florida that rely on palms. Find out about lethal yellowing treatment and detection in this article.

What is Lethal Yellowing?

As the name implies, lethal yellowing is a fatal disease. It is caused by a phytoplasma, which is a microscopic organism a little less sophisticated than a bacteria. Insects called planthoppers carry the phytoplasma from tree to tree. Planthoppers can’t survive at temperatures below freezing, and this prevents the disease from spreading into other parts of the country. Lethal yellowing disease can’t be controlled by killing the insect vector because insecticides often fail to come into contact with these constantly moving, flying insects.

Lethal yellowing disease affects coconut palms, date palms, and a few other palm species. In the U.S., it occurs in the lower third of the state of Florida where temperatures never drop below freezing. Palm trees in some parts of the Caribbean, as well as Central and South America, may also suffer from the disease. There is no cure, but you can extend the life of your tree and prevent lethal yellowing from spreading.

Before you embark or a campaign to control leafhoppers and planthoppers, make sure you have lethal yellowing and not a less severe disease with similar symptoms. The symptoms of lethal yellowing appears in these three stages:

Trees infected with lethal yellowing disease should be removed and replaced with a resistant species. Consider planting native varieties, which have a natural resistance to the protoplasm. Taking the tree down as soon as you detect the disease helps prevent the spread to other trees.

When trees are rare or valuable, they can be injected with antibiotics. This is an expensive treatment, and the antibiotics are only available to professional arborists in the lower third of the state of Florida. Injections are only used as part of a broader control plan that includes the eventual replacement of the tree. Do not eat coconuts collected from treated palms.

Printer Friendly Version
Read more about Palm Trees
<PreviousNext>
Did you find this helpful? Share it with your friends!
FacebookTweetPinEmail
Related Articles
Newest Articles
You might also like…
Additional Help & Information