Sago Palm Watering – How Much Water Do Sago Palms Need 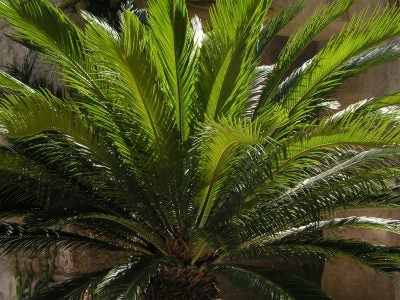 Despite the name, sago palms are not actually palm trees. This means that, unlike most palms, sago palms can suffer if watered too much. That being said, they might need more water than your climate is going to give them. Keep reading to learn more about water requirements for sago palm trees and tips on how and when to water sago palms.

When to Water Sago Palms

How much water do sago palms need? During the growing season, they need moderate watering. If the weather is dry, the plants should be watered deeply every one to two weeks.

Sago palm watering should be done thoroughly. About 12 inches (31 cm.) away from the trunk, build up a 2 to 4 inch (5-10 cm.) high berm (a mound of dirt) in a circle surrounding the plant. This will trap water above the root ball, allowing it to drain straight down. Fill the space inside the berm with water and allow it to drain down. Repeat the process until the top 10 inches (31 cm.) of soil are moist. Don’t water in between these deep waterings–allow the soil to dry out before doing it again.

Water requirements for sago palm trees that have just been transplanted are a little different. In order to get a sago palm established, keep its root ball consistently moist for the first four to six months of growth, then slow down and allow the soil to dry out between waterings.

Not everyone can grow a sago outside in the landscape so sago palm watering for those that are container grown is often performed. Potted plants dry out more quickly than plants in the garden. Watering a potted sago palm is no different.