Sago Palm Outdoor Care: Can Sagos Grow In The Garden 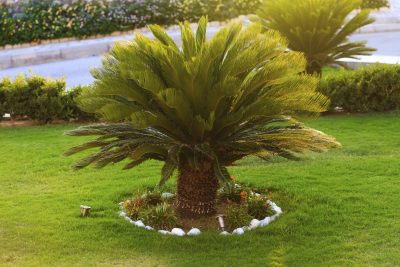 Sago palms are native to southern Japan. Oddly, these plants aren’t even palms but are cycads, a group of plants that predate the dinosaurs. Can Sagos grow in the garden? Growing Sago palms outdoors is only suitable in USDA zones 9 to 11. That means they cannot survive sustained freezing temperatures and are more suited to tropical and sub-tropical regions. However, there are ways to raise a Sago outside even for northern gardeners.

Can Sagos Grow in the Garden?

If you are looking for a touch of the exotic, with tropical flair and ancient sophistication, you can’t go wrong with a Sago palm. Outdoor Sago palm plants are easy to grow and have a slow growth rate that makes them perfect container plants. You can also grow the cycad as an indoor houseplant in cooler climates. In summer you can bring your Sago outside until cold temperatures arrive.

As a cycad, Sagos are more closely related to conifers than palms. However, their feathery, large fronds and rough trunk bring to mind a tropical palm tree, so hence the name. Sago palms are not terribly hardy and can be damaged at 30 degrees F. (-1 C.). When growing Sago palms outdoors, it is important to keep this fact in mind. Sago palm outdoor care isn’t particularly challenging but it is important to watch your weather report and be ready to act if you live in a zone that is under the Sago’s hardiness.

Those of us who live in cooler climes can still care for a Sago palm outside but will need to have the plant mobile. The plants are slow growing but can eventually reach 20 feet (6 m.), although it may take up to 100 years to achieve this height. Due to the slow growth rate, they make ideal container plants and keeping them potted allows you to move them to more favorable conditions, indoors or out. Outdoor Sago palm plants benefit from the circulation afforded by the wind and the lighting. They are also potential prey to disease and pests which are less likely to happen when they are grown in the home.

Care for Sago Palm Outside

Sago palm outdoor care isn’t a lot different from indoor cultivation. The plant needs to be watered regularly while it establishes but is quite drought tolerant in the ground once its root system matures. If the plant is in ground, make sure the soil is freely draining. Boggy soil is one thing a Sago palm can’t forgive.

Fertilize the plant once per month starting in spring when it starts actively growing.

Watch for pests like mealybugs and scale, and combat them with horticultural soap.

Keep an eye on the weather and cover the root zone of the plant with organic mulch to protect the roots. If you are growing the plant in a cool or temperate zone, keep it potted so you can easily rescue the plant from a cold snap.