Conifer Needles Turning Color: Why Does My Tree Have Discolored Needles 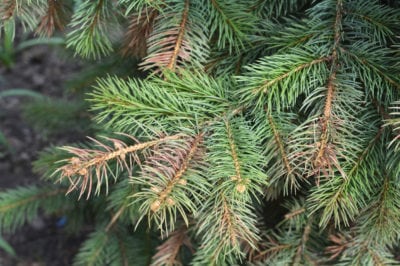 Sometimes conifer trees will be looking green and healthy and then the next thing you know the needles are changing color. The previously healthy tree is now draped in discolored, brown conifer needles. Why are the needles turning color? Can anything be done to treat browning conifer needles?

There are numerous reasons for discolored needles. Needles turning color may be the result of environmental conditions, disease or insects.

A common culprit is winter drying. Conifers transpire through their needles during the winter, which results in water loss. Usually, it’s nothing the tree can’t handle, but sometimes during the late winter to early spring when the root system is still frozen, warm, dry winds exacerbate water loss. This results in needles that are changing color.

Normally, when winter damage is to blame for discolored needles, the base of the needles and some other needles will remain green. In this case, the damage is generally minor and the tree will recover and push out new growth. Less often, the damage is severe and branch tips or entire branches may be lost.

In the future, to prevent browning conifer needles due to winter drying, choose trees that are hardy to your area, plant in well-draining soil and in an area protected from winds. Be sure to water young trees regularly in the fall and winter when the soil is not frozen. Also, mulch around the conifers to prevent deep freezing, making sure to keep the mulch about 6 inches (15 cm.) away from the trunk of the tree.

In some cases, conifers changing color in autumn is normal as they shed older needles in place of new.

Another reason for brown conifer needles may be the fungal disease Rhizosphaera kalkhoffii, also called Rhizosphaera needlecast. It affects spruce trees growing outside their native region and starts on the inner and lower growth. Needlecast is most common on Colorado blue spruce, but it does infect all spruces.

Needles at the tips of the tree remain green while older needles near the trunk become discolored. As the disease progresses, the infected needles turn brown to purple and progress up through the tree. The discolored needles fall of in the middle of summer, leaving the tree looking barren and thin.

As with other fungal diseases, cultural practices can prevent the disease. Water only at the base of the tree and avoid getting the needles wet. Apply a 3-inch (7.5 cm.) layer of mulch around the base of the tree. Severe infections can be treated with a fungicide. Spray the tree in the spring and then repeat 14-21 days later. A third treatment may be necessary if the infection is severe.

Another fungal disease, Lirula needle blight, is most prevalent in white spruce. There are no effective fungicide controls for this disease. To manage it, remove infected trees, sanitize tools, control weeds and plant trees with adequate spacing to allow for good air circulation.

Spruce needle rust is another fungal disease which, as its name suggests, afflicts only spruce trees. The tips of the branches turn yellow and, in late summer, light orange to white projections appear on infected needles that release powdery orange spores. Infected needles drop in early fall. Prune diseased shoots in late spring, remove severely infected trees and treat with a fungicide according to the manufacturer’s instructions.

Biological control of scale involves the use of the twice-stabbed lady beetle or parasitic wasps. While these can control the scale infestation, these beneficial predators are often killed off by other pesticides. The use of horticultural oil sprays in conjunction with insecticidal soap or insecticides is an effective control.

The best method to eradicate the scale is the use of crawler sprays that need to be sprayed two to three times at 7-day intervals beginning in mid-spring and mid-summer. Systemic insecticides are also effective and should be sprayed in June and again in August.

The spruce spider mite is detrimental to the health of conifers. Infestations of spider mites result in yellow to reddish-brown needles, accompanied by silk found between the needles. These pests are cool weather pests and are most common in the spring and fall. A miticide is recommended to treat the infestation. Spray in the early to mid-May and again in early September according to the manufacturer’s instructions.

Lastly, mountain pine beetles may be the cause of discolored needles. These beetles lay their eggs under the bark layer and in doing so leave behind a fungus that affects the tree’s ability to uptake water and nutrients. At first, the tree remains green but within a few weeks, the tree is dying and in a year all the needles will be red.

This insect has decimated great stands of pine trees and is a serious threat to forests. In forest management, both spraying of pesticides and cutting and burning of trees have been used to try and control the spread of the pine beetle.