Vines And Trees: Do Vines Harm Trees By Growing On Them 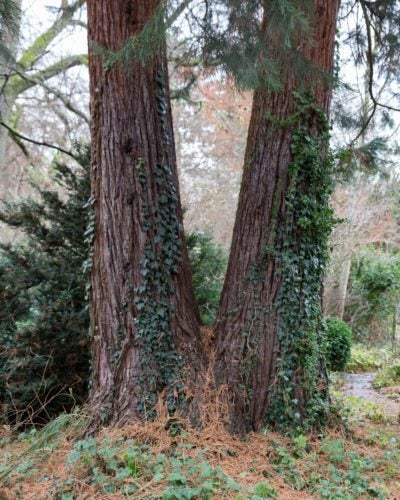 Vines can look attractive when they grow up your taller trees. Should you let vines grow on trees? The answer is generally no, but it depends on the particular trees and vines involved. For information about the risks of vines on trees, and tips on removing vines from trees, read on.

Trees and vines have a troubled relationship. Some vines climb up your tree trunks and add color and interest. Vines on trees can also cause structural problems as the extra weight breaks branches. Other vines shade out the tree’s foliage.

Do vines harm trees? Should you let vines grow on trees? As a general rule, trees and vines should grow separately. Certainly, evergreen vines and fast-growing vines should not be allowed to take over your trees. Generally, all evergreen and most vines that grow rapidly will damage trees. Slow growing deciduous vines are sometimes okay.

How do these vines damage trees they grow on? Vines that serve as groundcover, like ivy, cover the root flare of a tree in a dense mat. Their leaves cover the root collar. This creates a system where moisture is trapped against the trunk and root flare, causing diseases and potential decay.
Deciduous vines on trees shade out the tree’s leaves. Vines like wisteria can damage a tree in this way. They can also strangle the tree’s limbs and trunk with their twining.

Smaller vines and those that grow slowly don’t necessarily harm your trees. These can include clematis species, crossvine (Bignonia capreolata), passionflower (Passiflora), and even poison ivy (Toxicodendron radicans) – although no one intentionally grows this last one.

These vines, too, can cause problems for your trees so you’ll want to watch their progress. Unless you see them damaging the tree, you’ll have to weigh the advantages and risks yourself.

If you have vines on trees that are doing damage, you’ll want to know about removing vines from trees.

Don’t start ripping ropes of vine off the trees. Instead, cut the stem of each vine at the bottom of the tree. You may need a saw for thicker vines. This deprives the vine of its source of nutrients. (Always protect yourself when removing vines like poison ivy.)

Then pull all of the vines out of the ground in a thick “lifesaver” area around the trunk. This will prevent the vine from starting a new attempt to take over the tree. Leave the vines alone that are growing in the tree. Removing vines from trees by pulling them off the trunk could injure the tree.