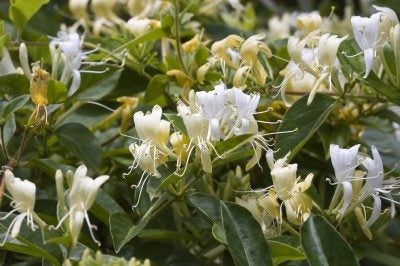 Native honeysuckles are climbing vines covered with beautiful, sweetly scented flowers in spring. Their close cousins, Japanese honeysuckle (Lonicera japonica), are invasive weeds that can take over your garden and damage the environment. Learn how to distinguish native honeysuckle from the exotic species and techniques for honeysuckle weed control in this article.

Japanese honeysuckle was introduced in the U.S. as a ground cover in 1806. Birds loved them and spread the vines by eating the seeds and transporting them to other areas. By the early 1900’s, it was clear that the vine could spread rampantly in both open fields and forests, crowding and shading out native species. Freezing winter temperatures keep the vines in check in cold, northern climates, but in southern and Midwestern states, managing honeysuckle weeds is a never-ending problem.

Japanese honeysuckle weed is somewhat easy to differentiate from native species. For example, most native honeysuckles are fused at the stem so that they form one leaf. Leaves are normally a medium green on the upper portion with a bluish green hue on the underside. Japanese honeysuckle leaves are separate, growing opposite from each other on the stem and are dark green all over.

Is Honeysuckle a Weed?

In many cases, whether or not a plant is a weed is in the eye of the beholder, but Japanese honeysuckle is always considered a weed, especially in mild climates. In Connecticut, Massachusetts, New Hampshire, and Vermont, Japanese honeysuckle is considered a noxious weed. It is one of the top ten invasive plants in Georgia and a category 1 invasive plant in Florida. In Kentucky, Tennessee, and South Carolina it is listed as a severe invasive threat.

Based on plant surveys, these labels come with restrictions that make it illegal to import or sell the plant or its seeds. Where it is legal, it is still best to avoid it. In the garden Japanese honeysuckle can overrun your plants, lawns, trees, fences, and anything else in its path.

How to Control Honeysuckle

If you only have a few vines, cut them off at ground level in late summer and spot treat the cut ends with undiluted glyphosate concentrate. The undiluted concentrate is usually 41 or 53.8 percent glyphosate. The label should state the percentage to be used.

If you have a large stand of honeysuckle, mow or weed whack the vines as close to the ground as possible. Allow them to re-sprout, then spray the sprouts with a 5 percent solution of glyphosate. You can make the solution by mixing 4 ounces of concentrate in 1 gallon of water. Spray carefully on a calm day because the spray will kill any plant it touches.

While time consuming, digging up or hand-pulling the vines is the best option for those wishing to avoid the use of chemical control. Chemicals should only be used as a last resort, as organic approaches are much more environmentally friendly.