Ancient Trees – What Are The Oldest Trees On Earth 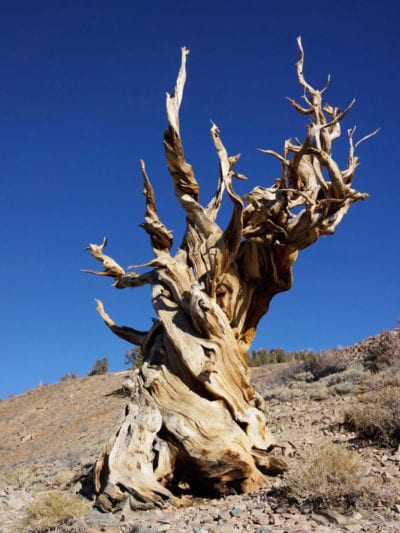 If you’ve ever walked in an old forest, you’ve probably felt the magic of nature before human fingerprints. Ancient trees are special, and when you are talking about trees, ancient really means old. The oldest tree species on earth, like the ginkgo, were here before humankind, before the landmass divided into continents, even before the dinosaurs.

Do you know which trees living today have the most candles on their birthday cake? As an Earth Day or Arbor Day treat, we’ll introduce you to some of the world’s oldest trees.

Some of the Oldest Trees on Earth

Below are some of the world’s oldest trees:

Many experts give the Methuselah Tree, a Great Basin bristlecone pine (Pinus longaeva), the gold medal as the oldest of ancient trees. It is estimated to have been on earth for the past 4,800 years, give or take a few.

The relatively short, but long-lived species, is found in the American West, mostly in Utah, Nevada, and California and you can visit this particular tree in Inyo County, California, USA—if you can find it. Its location is not publicized to protect this tree from vandalism.

Not all of the oldest trees around the world are found in the United States. One ancient tree, a Mediterranean cypress (Cupressus sempervirens), is found in Abarkuh, Iran. It may even be older than Methuselah, with an estimated age ranging from 3,000 to 4,000 years.

The Sarv-e Abarkuh is a national natural monument in Iran. It is protected by the Cultural Heritage Organization of Iran and has been nominated to UNESCO’s World Heritage List.

It’s not surprising to find a redwood among the oldest living trees. Both coastal redwoods (Sequoia sempervirens) and giant sequoias (Sequoiadendron giganteum) break all the records, the former as the world’s tallest living trees, the latter as the trees with the most mass.

When it comes to the oldest trees around the world, a giant sequoia called General Sherman is right up there at between 2,300 and 2,700 years old. You can visit the General in the Giant Forest of Sequoia National Park near Visalia, California, but be prepared for neck strain. This tree is 275 feet (84 m.) tall, with a mass of at least 1,487 cubic meters. That makes it the largest non-clonal tree (not growing in clumps) in the world by volume.

Here is another international member of the “oldest trees around the world” club. This beautiful, common yew (Taxus baccata) is thought to be between 4,000 and 5,000 years old.

To see it, you’ll have to travel to Conwy, Wales and find St. Digain’s Church in the Llangernyw village. The yew grows in the courtyard with an age certificate signed by British botanist David Bellamy. This tree is important in Welsh mythology, associated with the spirit Angelystor, said to come on All Hallows’ Eve to foretell deaths in the parish.