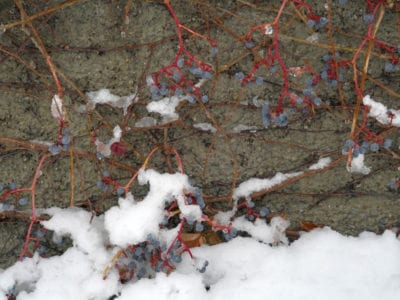 If you’re looking for a dense, deciduous vine to cover a wall or trellis, climb a tree, or hide landscape problems such as stumps and boulders, you should consider Boston ivy (Parthenocissus tricuspidata). These sturdy vines grow to lengths of 30 feet (9 m.) and give complete coverage to almost anything. They tolerate any light exposure, from full sun to full shade, and aren’t picky about the soil. You’ll find dozens of uses for this versatile vine. But what about keeping Boston ivy over winter?

In fall, Boston ivy leaves begin a color transformation that goes from red to purple. The leaves cling to the vines longer than most deciduous plants, but eventually drop in early winter. After they fall, you can see the dark blue fruit. Called drupes, these berry-like fruit keep the garden lively in winter because they provide food for a number of songbirds and small mammals.

Boston ivy winter care is minimal and consists primarily of pruning. First year vines may benefit from a layer of mulch, but older plants are very hardy and don’t need added protection. The vine is rated for USDA plant hardiness zones 4 through 8.

Does Boston Ivy Die in Winter?

Boston ivy goes dormant in winter and may look as though it is dead. It’s just waiting for changes in temperature and light cycles to signal that spring is on the way. The vine quickly returns to its former glory when the time is right.

There are a couple of advantages to growing perennial vines like Boston ivy that lose their leaves in winter. While the vines grown against a trellis or pergola provide good shade from summer heat, they allow sunlight in once the leaves fall in winter. Bright sunlight can raise the temperature in the area as much as 10 degrees F (5.6 C.). If you grow the vine against a wall, it will help keep your home cool in summer and warm in winter.

Keeping Boston ivy over winter is easy as long as the temperature doesn’t typically drop below -10 F. (-23 C.) in your area. It doesn’t need winter feeding or protection, but it does need pruning in late winter. The vines tolerate hard pruning, and that is just what it needs to keep the stems in bounds.

Besides controlling the growth of the vine, hard pruning encourages better flowering. Although you probably won’t notice the inconspicuous little flowers, without them you won’t have fall and winter berries. Don’t be afraid to make severe cuts. The vines regrow quickly in spring.

Make sure you remove damaged and diseased parts of the vine as you prune. The vine sometimes pulls away from the supporting structure, and these stems should be removed because they won’t reattach. Vines may break under their own weight, and broken vines should be clipped and neatened.

Printer Friendly Version
Read more about Boston Ivy
<PreviousNext>
Did you find this helpful? Share it with your friends!
FacebookTweetPinEmail
Related Articles
Newest Articles
You might also like…
Additional Help & Information