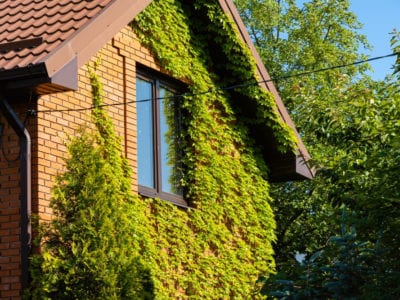 Lots of gardeners are attracted to the stately beauty of Boston ivy (Parthenocissus tricuspidata), but controlling this hardy plant can be a challenge both indoors and in the garden. If you’d like to incorporate this graceful plant into your garden or home, you’ll need to practice regular pruning; or if it’s already gotten out of hand, you’ll need to know how to remove Boston ivy without causing damage.

Pruning Boston ivy vine can be tricky. If done incorrectly, ivy leaves brown “footprints” as well as ragged edges. To keep your ivy looking tip-top, you’ll want to pinch, snap, or cut trailers as they develop. Removing these unruly shoots will keep your ivy at the desired size, and as an added benefit, ivy cuttings root easily when transplanted into a new pot and make a great hostess/host gift at parties.

As an alternate to pinching or cutting back shoots, you can also pin them down. Simply choose a few healthy shoots and use floral or hair pins to lock them into place, preventing them from creating trailers and climbing. This method only works well with potted ivy, however, and you’ll need to be sure to remove any dead leaves to prevent rot.

Boston ivy control outdoors can be very challenging and many gardeners will advise you not to plant ivy unless it can be confined in a pot or within a bordered space. However, you may have inherited an ivy-filled garden or find this emerald-leaved beauty too hard to resist. If that’s the case, you’ll want to brush up on how to remove Boston ivy from brick, stone, and wood.

This plant is a notorious climber and will lock onto any surface with its trailers. Pulling ivy roughly off of surfaces can damage the exterior, as well as the plant. Pruning before the ivy starts to climb is always the best policy. However, if that’s not possible, there are a few tricks for keeping Boston ivy plants in bounds and removing them from surfaces.

How to Remove Boston Ivy

To remove ivy from brick or wood, prune the leaves. Sever the trailers that you don’t want to remain on the wood or stone from the plant and then apply an herbicide. I’d suggest white vinegar, as it will kill ivy in a more non-toxic manner. White vinegar will also kill any plants in the vicinity, so be sure to apply it only to the ivy itself.

Once the ivy has browned, it will fall from the brick or wood without damaging the surface or any paint. You will need to continue to prune the remaining ivy plant on a regular basis though.

Care of Boston ivy is simple. It prefers warm, mild climates and moist, aerated soil, but it will grow (and most likely thrive) in most locations.

It is the perfect gift for a novice gardener since it’s almost impossible to kill. You will need to plant it at least 15 feet (4.5 m.) from any surface on which you do not want it to climb, and always keep your pruning shears ready.

With care, your ivy will thrive indoors or outdoors for many years to come.