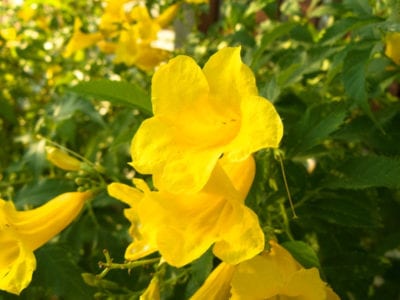 What is cat’s claw plant? Cat’s claw (Macfadyena unguis-cati) is a prolific, fast-growing vine that produces tons of bright, vibrant flowers. It spreads quickly and is considered invasive in some places, but if you treat it right it can have a big payoff. Keep reading to learn more cat’s claw plant information, including how to grow cat’s claw vines and cat’s claw plant care.

Growing a cat’s claw vine is easy. The problem usually isn’t so much keeping it alive as keeping it in check. Cat’s claw plants spread through underground tubers and can often pop up out of the ground in unexpected spots. The best way to prevent spreading is to plant it in a restrictive spot, like between a wall and pavement.

Cat’s claw is winter hardy in USDA zones 8 through 12, and evergreen in zones 9 and above. It can reach 20 to 30 feet (6-9 m.) in length, as long as it has something to climb. It does well on trellises, but it’s known for its ability to cling to and climb almost any surface, including glass.

How to Grow Cat’s Claw Vines

Cat’s claw plant care is easy. The vines tend to prefer moist and well-drained soil, but they’ll do well in virtually anything as long as it’s not soggy. They like full to partial sun.

Propagating a cat’s claw plant is easy– it grows well from cuttings, and it can usually be started successfully from the seeds found inside its seed pods, which turn brown and split open in the autumn.

Collect the seeds and keep them dry until you want to plant them. Press them into a pot of growing medium, but don’t cover them. Keep the soil moist by covering it with plastic wrap– the seeds should germinate in three weeks to three months and can be transplanted to their permanent spot in the garden.

After that, the plant basically cares for itself, other than occasional watering. Pruning the vine can also help with keeping it more manageable.