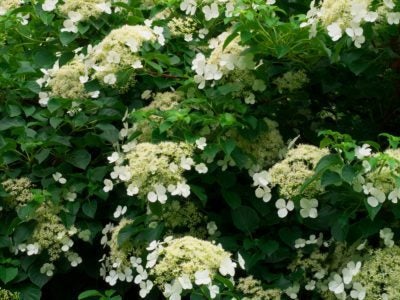 When to Prune a Climbing Hydrangea

Staggered pruning for overgrown plants: If the climbing hydrangea vine is badly overgrown, reduce the size gradually by staggering the pruning over a span of two or three years.

Hard pruning of old or badly neglected plants: Old, neglected vines can be cut to the ground. This means you won’t enjoy blooms the coming season, but the rejuvenated plant should come back better than ever the following year.

How to Prune Climbing Hydrangea

Cutting back hydrangea vines is uninvolved; simply cut off wayward shoots just below spent blooms or at the point where the vine joins a larger stem. You can also cut off old or dead stems at the base of the plant to stimulate healthy new growth.

Always use clean, sharp pruners when cutting back hydrangea vines. Wipe the pruners with rubbing alcohol or a solution of bleach and water to kill bacteria.

Printer Friendly Version
Read more about Climbing Hydrangea
<PreviousNext>
Did you find this helpful? Share it with your friends!
FacebookTweetPinEmail
Related Articles
Newest Articles
You might also like…
Additional Help & Information