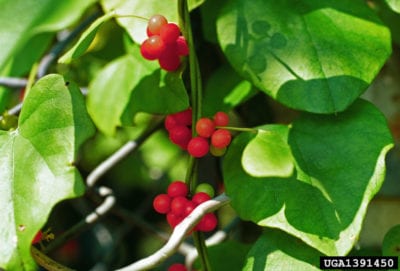 The Carolina moonseed vine (Cocculus carolinus) is an attractive perennial plant that adds value to any wildlife or native bird garden. In the fall, this semi-woody vine produces brilliant clusters of red fruit. These Carolina moonseed berries provide a source of food for various species of birds and small animals during the winter months.

The Carolina moonseed has several common names, including Carolina snailseed, red-berried moonseed, or Carolina coral bead. Except for the latter, these names are derived from the berry’s single distinctive seed. When removed from ripened fruit, moonseeds resemble the crescent shape of a three-quarter moon and is reminiscent of the conical shape of a seashell.

The natural range of the Carolina moonseed vine runs from Southeastern U.S. states through Texas and northward into the southern states of the Midwest. In some areas, it’s considered an invasive weed. Gardeners report the Carolina moonseed can be difficult to eradicate due to its extensive root system and the natural distribution of its seeds by birds.

In its natural habitat, these moonseed plants grow in fertile, swampy soil or near streams which flow alongside forest edges. The moonseed vines climb to heights of 10 to 14 feet (3-4 m.). As a twining type vine, the Carolina moonseed has the potential to strangle trees. This is more of a problem in the Southern climates where warmer temperatures don’t cause winter dieback.

Grown primarily for the vibrant colored berries, the heart-shaped leaves of this vine add visual appeal to the garden during the spring and summer months. The yellowish green flowers, which appear in late summer, are insignificant.

How to Grow Carolina Moonseed Plants

The Carolina moonseed vine can be started from seeds or stem cuttings. The seeds require a period of cold stratification and are often distributed by birds or small animals who have consumed the fruit. The vine is dioecious, requiring both a male and a female plant to produce seeds.

Place plants in full sun to partial shade, being sure to give them a sturdy fence, trellis, or arbor to climb. Choose the location wisely as this plant exhibits a fast growth rate and has invasive tendencies. The Carolina moonseed vine is deciduous in USDA zones 6 to 9, but often dies back to the ground during harsh zone 5 winters.

These native vines require little care. They are tolerant of heat and rarely need supplemental water. They are adaptable to a wide range of soil types from sandy riverbanks to rich, fertile loam. It also has no reported pest or disease issues.