Bad Smelling Wisteria: Why Does My Wisteria Smell Bad 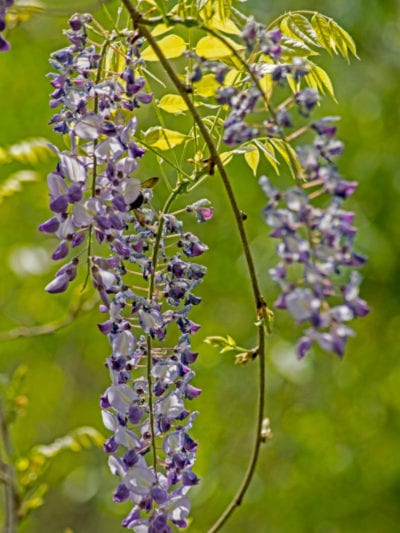 Why Does My Wisteria Smell Bad?

Flowering vines are much sought after for their ability to cover unsightly areas, provide privacy, give shade, and for their beauty. A commonly planted vine that encompasses all these attributes is the wisteria.

Wisteria vines often have the bad reputation of monopolizing a garden space. This is true of Chinese and Japanese varieties, so many gardeners opt for ‘Amethyst Falls’ wisteria. This variety is more easily trained to a trellis or arbor and it blooms heavily a few times each growing season.

While there is much information out there regarding this cultivar, there is one tiny little detail that is often omitted, purposely or not. What is this great secret? As beautiful as ‘Amethyst Falls’ may be, this cultivar is the culprit, the reason for a smelly wisteria. It’s true – this cultivar of wisteria smells like cat pee.

Well, now that you know why you have a bad-smelling wisteria, I imagine you would like to know if there is anything you can do about it. The unfortunate truth is that while some gardeners think this stench might be the result of a pH imbalance, the reality is that ‘Amethyst Falls’ just plain smells like cat urine.

The good news is that the foliage isn’t the guilty party, meaning the plant only reeks when in bloom. It’s really a case of either live with a wisteria that smells bad for the short time the vine is blossoming, move it to a further away area of the garden, or just get rid of it.

Another bonus regarding ‘Amethyst Falls’ is it is great for attracting hummingbirds. Hummingbirds, I might add, have very little sense of smell and are not the least disturbed by the stench of the blooms.

Printer Friendly Version
Read more about Wisteria
<Previous
Did you find this helpful? Share it with your friends!
FacebookTweetPinEmail
Related Articles
Newest Articles
You might also like…
Additional Help & Information