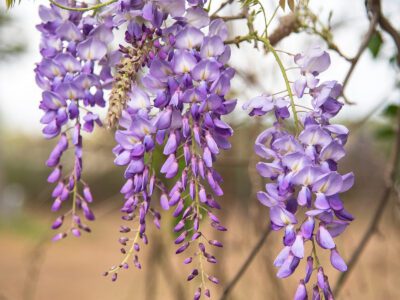 Wisteria is a magical vine that provides a cascade of beautiful, lilac-blue blooms and lacy foliage. The most commonly grown ornamental variety is Chinese wisteria, which while lovely, can be invasive. A better choice is its cousin the American wisteria (Wisteria frutescens). Growing American wisteria as an alternative still offers the elegant blooms and foliage but in a native, non-invasive form. Read on for some tips on how to grow American wisteria and enjoy this North American native in your landscape.

What is American Wisteria?

Using native plants in the garden is a smart choice. This is because native plants are uniquely adapted to the region and require less specialized care. They also won’t harm the wild flora if they happen to escape cultivation. American wisteria is one such indigenous plant. What is American wisteria? It is a friendly local vine with gregarious blue-flowered charm and might be perfect in your garden.

American wisteria can be found throughout the southeastern states. It primarily occurs in bottomlands in moist areas such as swamps, along rivers, and in flood plains. As a cultivated plant, it is suitable in USDA zones 5 to 9.

It is a deciduous vine that may grow up to 30 feet (9 m.). This rambling beauty has delicate pinnate leaves divided into 9 to 15 leaflets. The flowers are pea-like and hang in decorative pendant clusters, usually blue or violet, but occasionally creamy white. It is a more controlled plant than the Chinese version and has added seasonal interest with its velvet pods.

How to Grow American Wisteria

A quick search indicates that this plant is not widely available, but it can be ordered online. In areas where it is native, some local nurseries have the plant in cultivation. If you get lucky enough to find the plant, choose a nutrient-rich, moist location of the garden.

It will bloom in either full sun or partial shade. Adding to its adaptability, it can also tolerate a range of soil types. Be cautious when planting it where curious animals or children play. According to American wisteria information, the seeds in the pods are quite toxic and can lead to extreme nausea and vomiting.

A support structure is required for growing American wisteria. A trellis, arbor, or even a fence are ideal locations to display the dainty leaves and dangling blooms. The plant requires consistent moisture, especially in summer.

Pruning is still a crucial part of American wisteria care. In areas where it is grown over a structure, prune it hard annually after flowering to keep the vine in check. On horizontal surfaces such as fences, prune in winter to remove side shoots and keep the plant tidy.

American wisteria is not troubled by any significant diseases or insects. In fact, it is an important host plant for the silver-spotted skipper and long-tailed skipper butterflies.