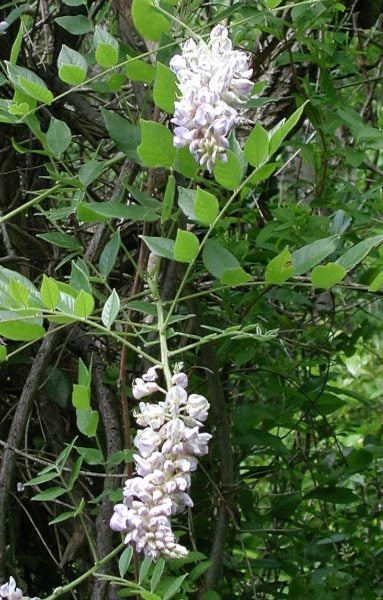 If you’ve ever seen a wisteria in bloom, you will know why many gardeners have a penchant for growing them. As a child, I remember my grandmother’s wisteria creating a beautiful canopy of dangling pendulous racemes on her trellis. It was a sight to behold, and to smell, as they were wonderfully fragrant – just as enchanting to me now as an adult as it was back then.

There are about ten known species of Wisteria, with numerous cultivars associated with each that are native to the eastern United States and eastern Asia. One of my personal favorites is Kentucky wisteria (Wisteria macrostachya), the type my grandmother grew. Read on to learn more about caring for Kentucky wisteria vines in the garden.

What is Kentucky Wisteria?

Kentucky wisteria is notable because it is the hardiest of wisteria, with some of its cultivars rated for zone 4. The majority of Kentucky wisteria (such as cultivars ‘Abbeville Blue,’ ‘Blue Moon,’ and ‘Aunt Dee’) feature a color that falls in the blue-violet spectrum, the one exception being the cultivar ‘Clara Mack,’ which is white.

This deciduous woody stemmed twining vine can grow 15 to 25 feet (5-8 m.) long. Like all twining vines, you will want to grow Kentucky wisteria vines on some support structure such as a trellis, arbor, or chain link fence.

To considerably shorten the time to flowering and a more reliable path to flowering, you will want to either obtain or prep your own cuttings or acquire good quality plants from a certified nursery.

Your Kentucky wisteria planting should occur in the spring or fall and be in soil that is characteristically moist, well-draining, and slightly acidic. Kentucky wisteria in gardens should be in a location that is full sun to part shade; however, a full sun location receiving at least six hours of sun each day is preferable as it will help encourage better bloom growth.

In addition to proper lighting, there are other ways to help elicit the blooming of Kentucky wisteria in gardens, such as a spring feeding of superphosphate and routine pruning in summer and winter.

Even though wisteria is considered to be drought tolerant, you will want to keep the soil consistently moist during the first year of growing Kentucky wisteria to help the root system get established.