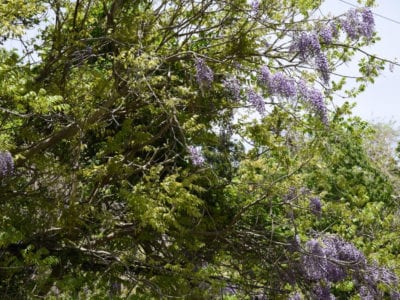 Wisteria is a classic, deciduous vine, beloved for its large, drooping clusters of fragrant, pea-like flowers and quick growth habit. Wisteria fits in nicely in cottage gardens, Zen/Chinese gardens, formal gardens, and can even do well in xeriscape gardens once they are established. There are approximately ten different species of wisteria, native to China, Korea, Japan, and the eastern United States.

Silky wisteria plants are hardy in zones 5-10. They bloom from mid-spring to mid-summer. The violet-lavender blooms are highly fragrant and attract bees, butterflies, and birds to the garden. From a distance, wisteria flower racemes look like clusters of grapes. Up close, the small flowers are similar to pea flowers.

When the flowers fade, wisteria produces pea-like seed pods, and these seeds can be toxic if ingested. When propagated by seed, silky wisteria plants may take 5-10 years before they produce blooms. However, wisteria plants usually produce more and more blooms each year they age.

How to Grow a Silky Wisteria Vines

Silky wisteria vines grow best in full sun to part shade. They will tolerate poor soil but prefer moist loam. Fertilize silky wisteria plants in spring, with a low nitrogen fertilizer. Wisteria plants have nitrogen-fixing properties, so adding nitrogen to them is not necessary. They will, however, benefit from added potassium and phosphorus.

Silky wisteria plants are a fast-growing deciduous vine, growing up to 40 feet (12 m.) long. Silky wisteria vines will quickly cover a pergola, arbor, or trellis. They can also be trained to grow in the form of a tree. Wisteria can be pruned after blooming to control its growth.

Some popular varieties of silky wisteria plants are: