Pruning Wisteria: How To Trim A Wisteria 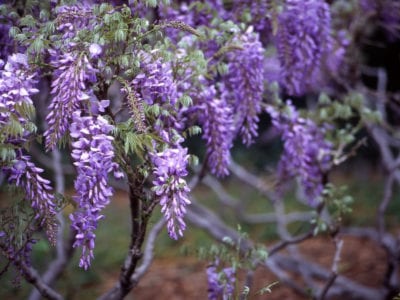 When you grow something as beautiful as the wisteria, you don’t want to ruin it by pruning wrong. Therefore, make sure to prune your wisteria according to the directions below. Let’s look at a guide to step-by-step pruning of a wisteria.

How to Step-by-Step Prune Wisteria

So, first things first. When do you prune wisteria? You will want to prune wisteria in midwinter and again in the summer time. In the summer, pruning your wisteria should be done about two months after it flowers.

When it comes to how to trim a wisteria, you first should recognize that regular wisteria trimming should be done to control growth and encourage more flowers. You cut the season’s current shoots back to within three buds from the base. These buds will then bear the coming season’s new shoots and flowers.

Pruning wisteria can be done to overgrown wisteria as well. In this case, wisteria trimming can be accomplished by lopping and cutting as much as you want, down to about 3 feet (1 m.) below where you really want the wisteria to be. This way, as new shoots pop up and it grows to that height, you will get nice new shoots the following spring. Remember that when you’re pruning wisteria in this fashion, cutting it back that far will prevent any flowering for a few years to come while the new shoots mature once more.

After pruning wisteria, you will find that your wisteria trimming may have caused some larger branches to die back. This is alright. You can just take them out of the plant or cut them back all the way. It happens. and there is not much you can do about it. Never fear. It will not kill the plant.

Sometimes when it comes to how to trim a wisteria, some people feel that vigilant wisteria trimming will eventually cause an older wisteria bush to bloom, especially if it hasn’t bloomed in a while. This may or may not be true, but might be worth trying. When pruning wisteria, it does cause new growth and the flowers will eventually appear on newer growth. It just may take a few years to accomplish your goal.

Some people believe the best way to trim a wisteria, especially an older one, is to use a shovel and cut the roots. They feel that this actually helps the plant to absorb more nutrients from the soil and also to eventually flower. Again, you probably cannot kill it, so feel free to give this method a try as well!