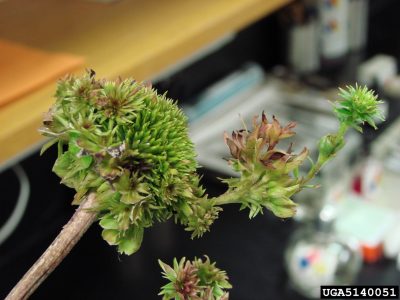 Diseases in plants can be very difficult to diagnose due to the nearly infinite numbers of pathogens. Phytoplasma disease in plants is generally seen as “yellows,” a form of disease common in many plant species. What is phytoplasma disease? Well, first you need to understand the phytoplasma life cycle and how they are spread. New studies indicate that phytoplasma effects on plants can mimic damage shown by psyllid insects or leaf roll viruses.

Phytoplasmas infect plants and insects. They are spread by insects through their feeding activities which inject the pathogen into the phloem of the plants. The pathogen causes a host of symptoms, most of which are potentially damaging to plant health. Phytoplasmas live in the phloem cells of a plant and usually, but not always, cause disease symptoms.

These tiny pests are actually bacteria with no cell wall or nucleus. As such, they have no way to store necessary compounds and must steal these from their host. Phytoplasmas are parasitic in this way. Phytoplasmas infect insect vectors and replicate within their host. In a plant, they are limited to the phloem where they replicate intracellularly. Phytoplasmas cause changes in their insect and plant hosts. The changes in the plants are defined as diseases. There are 30 recognized insect species that transmit the disease to various plant species.

Phtoplasma disease in plants can take on several different symptoms. The most common phytoplasma effects on plants resemble the common “yellows” and can affect over 200 plant species, both monocots and dicots. The insect vectors are often leafhoppers and cause such diseases as:

The primary visible effect is yellowing leaves, stunted and rolled foliage, and unripened shoots and fruits. Other symptoms of phytoplasma infection might be stunted plants, a “witches’ broom” appearance on terminal new bud growth, stunted roots, aerial tubers, and even die back of entire portions of the plant. Over time, the disease can cause death in plants.

Controlling phytoplasma diseases usually begins with controlling insect vectors. This starts with good weed removal practices and clearing brush that can host insect vectors. Bacteria in one plant can also spread to other plants, so often removal of an infected plant is necessary to contain the contagion.

Symptoms appear in mid- to late summer. It can take 10 to 40 days for plants to exhibit infection after the insect has fed on them. Controlling leafhoppers and other host insects can help control the spread of the disease. Dry weather seems to increase leafhopper activity, so it is important to keep the plant watered. Good cultural care and practices will increase plant resistance and spread.