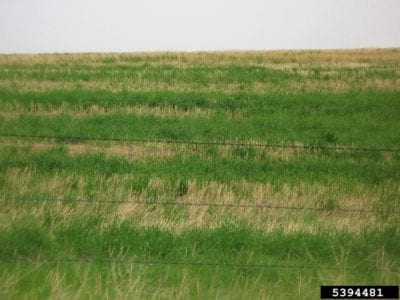 If you grow barley, you may need to learn something about rhizoctonia root rot of barley.

What is Barley Rhizoctonia Root Rot?

Rhizoctonia root rot of barley is also called barley rhizoctonia bare patch. That’s because the soil-borne fungus that causes it kills barley, leaving dead patches in barley fields. The patches vary in size from less than a foot or two (half a meter) to several yards (meters) in diameter.

Barley rhizoctonia bare patch is caused by the soil fungus Rhizoctonia solani. The fungus forms as a ‘web’ of filaments in the very top layer of the soil and grows up from there.

Symptoms of Barley with Rhizoctonia

How to Stop Rhizoctonia Root Rot

Rhizoctonia root rot is difficult to control or stop once it has attacked a barley crop. The fungus causing the disease has many possible hosts, so rotating crops doesn’t work very well.

To date, no cultivars have been developed that are resistant to rhizoctonia root rot of barley. Maybe this will happen in the future. Also, the fungus is unique in that it can survive and grow even without a living host plant, as long as there are organic materials in the soil.

Experts recommend using management practices that minimize the risk of barley rhizoctonia bare patch. These practices include cultivating the soil well a few weeks before planting. This can break up the fungal networks.

Other useful practices include anything that increases early root growth. Rhizoctonia only attacks very young roots, so helping them to grow can reduce disease. Seed treatment and fertilizers can help. Weed management is also important.