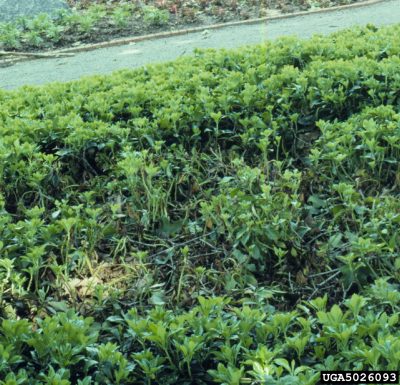 Prune damaged growth. Wipe cutting tools with bleach solution or rubbing alcohol between each cut to prevent spread of disease. Shake or rake the plant to remove infected leaves, then destroy the debris.

Although fungicide sprays won’t cure volutella blight, application of lime sulfur or copper sprays may help in case of severe infestations. Spray plants just before growth appears in spring, and then continue throughout the growing season as directed on the label. Plants may benefit from an additional volutella blight treatment in autumn to protect late summer growth.

Remove plants if the blight is overly severe. Replace them with more disease-resistant shrubs or groundcovers.

Water plants in the morning so the foliage has plenty of time to dry before temperatures drop later in the day, as volutella blight is more prevalent in wet, humid conditions. Avoid heavy mulch, which may keep the growing environment overly damp.

Treat insect infestations as they appear, and clean beds and rake plant debris in autumn.