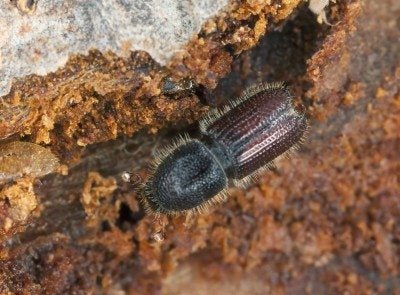 There are few things that can match a forest fire for sheer destructive force toward trees – that is, unless you consider the bark beetle. Like a forest fire, bark beetles can eat their way through whole stands of trees. Unfortunately, the beetles aren’t as obvious, so you should always be on the watch for new holes in your trees’ surfaces.

What are Bark Beetles?

Trees in the landscape represent someone’s major commitment to remake the area in a very long-term way. Since most trees easily live 50 years or more, it’s hard to not see them as permanent residents, but no matter how much you think they’re basically impervious, a tiny beetle can quickly take down the largest oak in the whole forest. Bark beetles on trees are not a small matter; once these insects establish colonies, tree death is nearly guaranteed.

Bark beetles are members of the family Scolytidae, with over 600 members appearing in the United State and Canada alone. These tiny beetles are generally about the size of a grain of rice but are rarely seen because the majority of their life cycle is spent inside of trees. Because of their elusive nature, bark beetle identification is often made by the species of trees attacked and the type of damage left behind.

Regardless of the specific bark beetle on any given tree, they cause similar damage. These beetles chew holes through the bark surface, then mine the phloem and cambial layers of bark on twigs, branches or the trunks on their preferred trees. As these mines expand, transport tissues are damaged or destroyed, which often results in flagging (the death of a large portion of a healthy tree) or dead tips on the growing ends of branches.

In addition to this bark beetle damage, these insects can carry tree pathogens deep into the tree as they mine, passing infections like Dutch elm disease from tree to tree.

There’s little you can do to save a bark beetle-infested tree, but if the infestation seems to be limited to certain branches, you can try to save the tree by cutting these parts out. Remove them from the area immediately and burn or otherwise dispose of them to prevent the bark beetles from escaping.

It can be nearly impossible to destroy these pests with insecticides, so make your trees less tempting targets instead. Bark beetles prefer to nest in trees that are already stressed or have large dead areas. Start by pruning your trees properly each and every year, then remember that they may need food or water to help them through stressful times, like hot summers or their attempt to recover from a serious pruning to remove a bark beetle colony.

If a tree is beyond saving, don’t wait for it to die and spread bark beetles further (or drop weakened limbs on unsuspecting victims). Instead, take the tree out preemptively and replace it with a healthy tree of a variety that’s less favored by these troublesome insects.

Note: Any references pertaining to the use of chemicals are for informational purposes only. Chemical control should only be used as a last resort, as organic approaches are safer and more environmentally friendly.