Insects
By: Becca Badgett, Co-author of How to Grow an EMERGENCY Garden
Printer Friendly Version 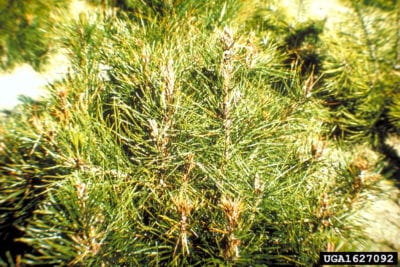 If you’re noticing holes or small tunnels in the needles and twigs of some of your trees, like cypress or white cedar, it is possible you have visiting cypress tip moths. If this happens each year, you may want to take a closer look. Dying branches on evergreens and conifer trees may result. If tree tips turn brown in late winter and spring, these may be cypress tip moth signs.

What is a Cypress Tip Moth?

This moth is a small, gray bug that reproduces damaging larvae. These larvae mine the foliage and twigs of evergreen trees and others, sometimes causing visible damage.

Cypress tip moths include several species in the genus Argyresthia. A. cupressella is also called cypress tip miner, while A. thuiella is called the arborvitae leaf miner. They lay eggs in the foliage and on the tips of twigs so their larvae can further mine (burrow into) the leaves and twigs and eat them. This causes drying out and death of the needle, twig, or leaf. The larvae are the juvenile insect stage that causes the damage.

This leaves holes and serpentine tunnels that later become large blotches in the foliage, causing discoloration of the twigs and leaves, then yellowing, browning, and dieback. Some cypress tip moth larvae spend the entire larval stage within the same needle. Tunnels are formed by movement and become larger with insect growth. There are several types of blotch leaf miners, the most common type.

A. cupressella burrows into young twigs of cypress trees while A. thuiella mines on leaves and twigs of cypress, juniper, arborvitae, and sometimes redwood. A full-stage attack by these moths may later cause areas of defoliation. While this damage makes the trees unsaleable and unsightly, it rarely causes damage to the health of the tree.

Treatment is not always necessary. If you wish to improve the appearance of problem trees, try managing cypress tip moths with the following tips and tricks:

Don’t confuse moth damage with the more serious leaf-spotting fungi, which cause similar symptoms. Insect-damaged needles or leaves will have a hollow place in the tunnels with signs of the insect or its frass. Leaf spot fungi damage won’t include tunnels.

Printer Friendly Version
Read more about Insects
<Previous
Did you find this helpful? Share it with your friends!
FacebookTweetPinEmail
Related Articles
Newest Articles
You might also like…
Additional Help & Information