Fig Beetle Facts – Control Of Fig Beetles In The Garden 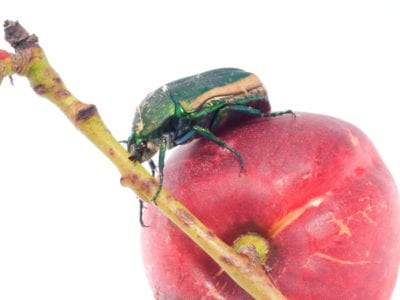 Figeater beetles can cause extensive injury in home lawns and gardens.

Figeater beetles are generally harmless and actually quite attractive. Many people don’t mind their presence in the garden, but due to their clumsy air-raid flight habits and loud buzzing, they may wear out their welcome in a hurry. In large numbers, they can do more serious damage.

Adult figeater beetles lay their eggs 6 to 8 inches (15-20 cm.) beneath the surface of the soil in late summer. The eggs hatch in about two weeks and survive by eating organic matter in the soil until winter. On warm days of late winter and spring, the thumb-sized grubs burrow to the surface where they feed on grass roots and thatch.

Their burrows and mounds of pulverized soil can cause an unsightly appearance in turf. The grubs pupate from late spring to midsummer, and adults emerge in two to three weeks. Adult fig beetles are attracted to ripe (especially overripe) fruit.

If fig beetles are causing problems in your lawn, maintaining healthy, thick turf is the best way to prevent damage by figeater beetles. Flood irrigation is often effective because the grubs can’t survive in wet soil for more than a couple of days. Digger wasps and certain types of nematodes may also keep the grubs in check.

If you maintain piles of mulch, compost, or manure, turn the piles often. You may want to screen compost to remove the larvae. In the garden, frequent tilling in fall and early spring can bring the grubs to the surface, where they will likely die of exposure or be eaten by birds.

If adult fig beetles are eating your fruit, discourage them by picking the fruit as soon as it ripens. Some gardeners like to leave a few overripe, rotting fruits in place to trap figeater beetles. When the fruit has attracted a few beetles, knock the pests into a container and dispose of them. (If you have chickens, they’ll be happy to take care of the pests for you!)

Chemical control is usually not recommended for control of fig beetles; however, in the event of large infestations, grubs may be controlled by applying pesticides in fall. Orchardists sometimes soak overripe fruit with pesticides. The fruit is then placed around the outer perimeter of the orchard.